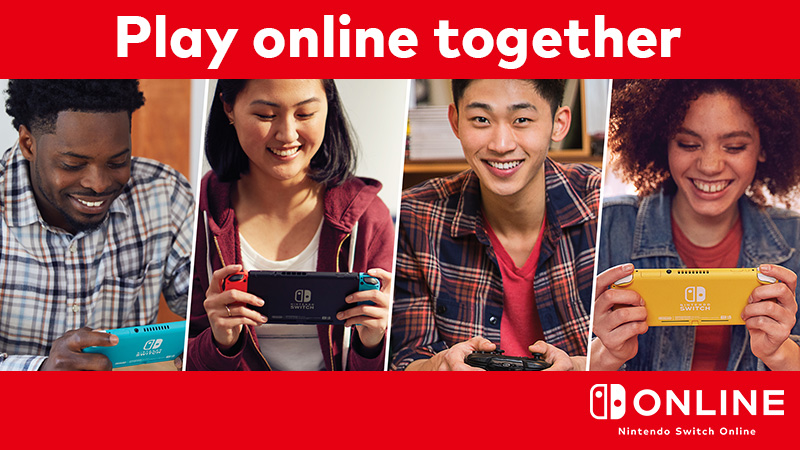 Gaming can be even more enjoyable when you’re playing with friends or family. But the fun doesn’t have to stop just because there’s a little distance between you and your crew. You can keep the fun going with these online* multiplayer games!


To help you get a few ideas for your next multiplayer bash, we’ve put together a list of games that you can play with your friends—no matter where they are—using a Nintendo Switch Online membership!


You can learn more about Nintendo Switch Online by tapping the corresponding icon on the right side of the screen.


Battle in various modes as one of your favorite Mushroom Kingdom friends. This definitive version of the Mario Kart™ 8 game includes a huge roster of playable characters, along with 48 courses for you to battle it out online with up to 12 players!


Make action your middle name as you rule the open streets of Paradise City in Burnout Paradise Remastered. Race hard and crash harder, battling your friends online, or joining forces in hundreds of online challenges.


Legendary game worlds and fighters collide in the ultimate showdown. Battle it out locally* or online with more characters, stages, music, and modes than past games in the series. You can even expand your roster of fighters with the Super Smash Bros. Ultimate Fighters Pass Vol. 2 paid DLC***!


With board games, card games, sports games, and much more, Clubhouse Games: 51 Worldwide Classics is an eclectic collection of games to play and discover. Each game includes how-to-play instructions and trivia tidbits so you can enjoy over 40 games locally* or online.


The world is at your fingertips as you fight for survival, fortune, and glory in Terraria. Delve deep into cavernous expanses, seek out ever-greater foes to test your mettle in combat, or construct your own city with up to eight players in online play.


Dive into intense, ink-splatting excitement in this colorful action shooter. Lay down some ink in a variety of modes with players from around the world! Gear-up at the Galleria mall to make sure you’re looking funky fresh in action—whether you’re trying Salmon Run or just battling it out in 4-vs-4 Turf War.


Two teams face off in this strategic team platformer with three ways to win: wipe out the enemy’s queen, hoard berries, or hop on the snail (yep…there’s a snail). Each of these victories may sound simple, but it will take cooperation and coordination among your teammates to win it all.


The classic side-scrolling beat-‘em-up series is back! Axel, Blaze, and Adam are teaming up with the next generation of fighters to take down a new crime empire. Clean up Wood Oak City by yourself or with a friend online!


Escape to a deserted island and create your own paradise as you explore, create, and customize in the Animal Crossing™: New Horizons game. Show off your island to family and friends—or pack your bags and visit theirs*. Island living is even better when you can share it together!


Kill bandits and beasts, collect powerful weaponry, and maybe even save the universe in Borderlands: Game of the Year Edition, Borderlands 2, and Borderlands: The Pre-Sequel, along with piles of add-on content for each game. Enjoy all three games solo or cooperatively with four-player online play.


Overwatch is a colorful team-based shooter game starring a diverse cast of powerful heroes. Travel the world, build a team, and contest objectives in exhilarating 6v6 combat. Choose to join a team of players from around the world or group up with your friends to compete in a variety of modes.


Explore a world that reacts to who you are and the choices you make. With five races to choose from, select your role and embark on an adventure, or gather up to three additional friends to help lay waste to an oppressive order in a world afraid of magic.


Embark on a journey through the Galar region, where you’ll challenge the troublemakers of Team Yell, while unraveling the mystery behind the Legendary Pokémon Zacian and Zamazenta. Looking to hook up with friends online? Just press the Y-button to access Y-Comm, the multiplayer hub!


Embark on a journey through the Galar region, where you’ll challenge the troublemakers of Team Yell, while unraveling the mystery behind the Legendary Pokémon Zacian and Zamazenta. Looking to hook up with friends online? Just press the Y-button to access Y-Comm, the multiplayer hub!


Fight your way through an all-new action-adventure game set in the Minecraft universe! Brave the dungeons alone or gather a few friends for four-player online play—all on your quest to save the villagers and take down the evil Arch-Illager!


You and your friends can get wacky with the absurd deathmatch Trivia Murder Party 2, the hidden identity game Push The Button, and more in the Jackbox Party Pack 6 game. Use your system, phones, and/or tablets as controllers to play with up to 10 players*!
You must log in or register to reply here.
Share:
Facebook Twitter Reddit Pinterest Tumblr WhatsApp Email Link