Trine 4 review: the biggest and best Trine yet 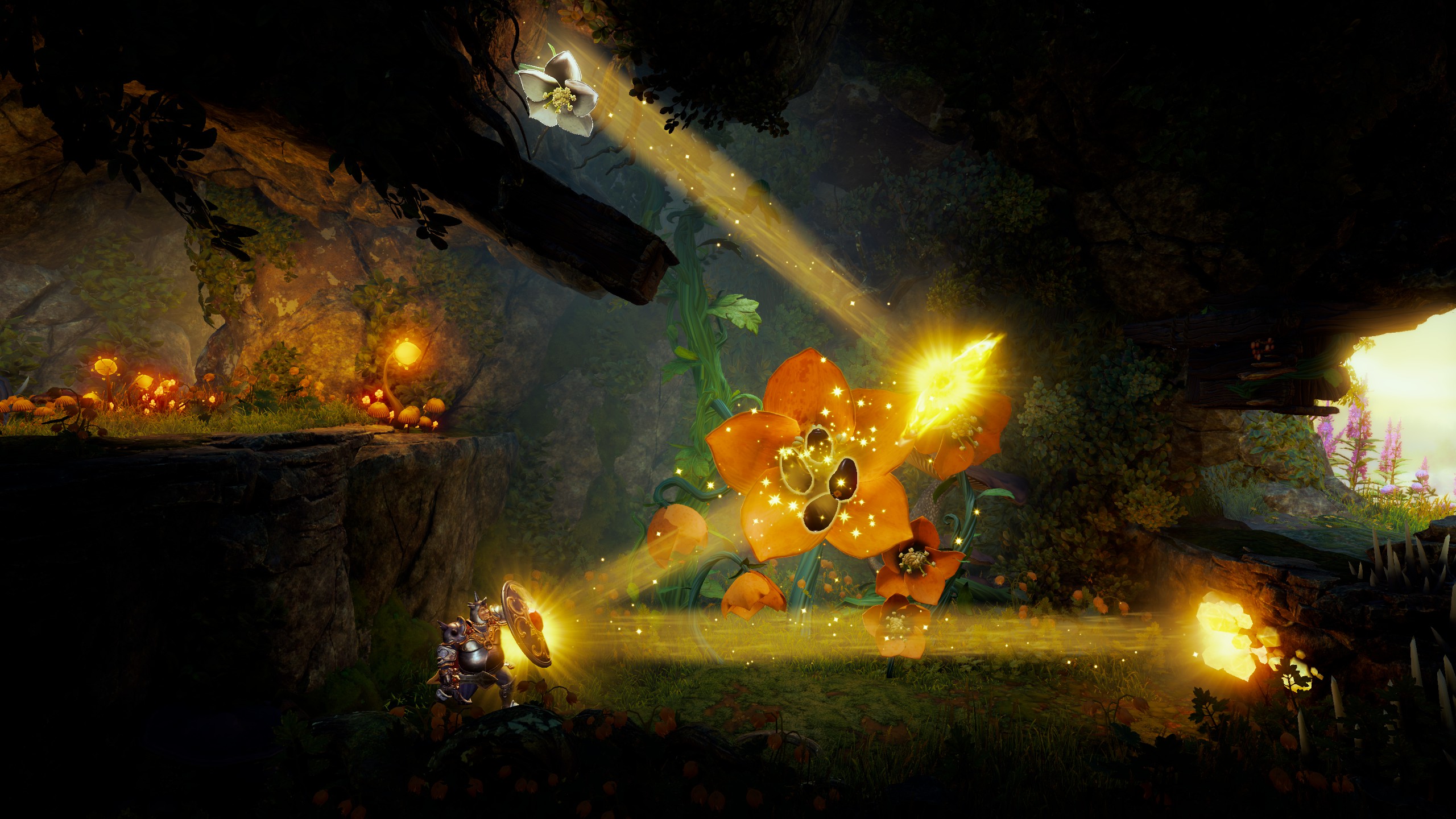 Trine 4 is a game I didn't know I wanted until it was on the screen before me. Three Trine games was more Trine than I ever thought I'd need, and given the title it seemed fitting to end the series as a trilogy, even if the last one was a bit duff. Trine 4 sounds like a Douglas Adams joke, only humour has never been Frozenbyte's strong point.


Availability: Available October 8th on PS4, Xbox One, Switch and PC
As it turns out, Trine 4 is more like Trine 3: Trine Harder. It dispenses with the erroneous experiment in 3D platforming of its predecessor, offering a more traditional sequel that doubles down on the stuff that made Trines 1 and 2 such absorbing platformers. It presents a fairytale world so rich and indulgent it's likely to give you gout, and offers physics-based puzzle platforming that's edges ever closer to being a Rube Goldberg simulator.

Trine 4 sees the heroic trio of Amadeus the Wizard, Zora the Thief, and Ser Pontius the Knight reunite to track down a missing prince suffering from night terrors so vivid that they come to life. Having escaped from the wizard's academy where he is equal parts student and lab rat, the Prince vanishes into a giant magical forest, forcing our heroes to track him down in what essentially amounts to a 12-hour long chase sequence.

Frankly, the story could be better, by which I mean it could be a story, rather than an excuse to string together the game's wide variety of levels. This isn't to say it's not enjoyable. It's genially written and the characters are as likeable as ever, bad jokes and all. But it's not what you'll be playing for. It also has zero relevance to the previous game's plot which ended on a cliff-hanger. Apparently Frozenbyte want to pretend Trine 3 never happened, which seems a little harsh, but functionally it doesn't make a huge amount of difference.

One advantage of the loose plot is it lets Frozenbyte run wild with the environment design. And in this area Trine 4 is positively feral. Not only is it the longest Trine yet - somewhere between 10 and 15 hours - it's also the most varied, taking players from icy mountain plateaus to sun-dappled autumnal forests, pumpkin-spotted farmlands and magical elven groves. Frozenbyte have always demonstrated a passion for folkloric woodlands, but Trine 4 is truly one of the best-looking platformers - no, one of the best-looking games - I've ever played.

Pretty games aren't exactly rare these days, but it's also important to emphasise just how pleasant Trine 4 is. There's something warm and comforting about the whole design - a fireside fairytale on a snowy winter's eve, all gingerbread cottages, Sleeping Beauty castles and anthropomorphic animals. One level takes place inside a hobbit-like badger's burrow, filled with rustic furniture and teetering stacks of books. In another, you help a grizzly bear pull a thorn from its paw, who then proceeds to follow you throughout the level. My favourite animal encounters involves a friendly seal who acts as big blubbery bouncepad to help you reach higher vantage points. In case that sounds a little cruel, the game briefly puts down its storybook to point out that it's a special magic seal, and that, generally, animals shouldn't be jumped on.

The chocolate-box visuals are matched by the mechanics, offering an impressive level of puzzling variety within its 2.5 dimensions. The fundamentals remain the same. Amadeus conjures boxes, balls and planks to create platforms and bridge gaps. Zora's arrows can trigger distant switches, while her grappling hook lets you create tightropes to cross chasms. Ser Pontius is all about smashing obstacles and bashing enemies - always your first choice in combat. But Frozenbyte elaborate considerably on these basics, introducing a new ability or puzzling element in virtually every level. Around the middle of the game, Zora acquires a "fairy rope", that lifts objects into the air, while Ser Pontius can create a spectral version of his own shield, allowing him to bounce light and water off it at multiple positions.


To solve Trine 4's many puzzles, these abilities need to be combined with countless different objects. Scales, seesaws, elevators, rotating wheels, sticky snowbanks, electrical currents, magnetic force-fields, portals, the list goes on. Some puzzles have hard solutions, while others allow you to essentially build your own, erecting a Meccano-like structure out of boxes and floating planks, then tying them together with ropes. The power of Trine's puzzling toolset occasionally works against it. Some puzzles that involve getting to a higher vantage point can essentially be "skipped" by placing a plank on the high platform and then grappling up to it. But personally, I've always liked the spongy fringes of Trine's play, and there are more than enough puzzles that require you to engage directly.

It's as well Trine 4's puzzling is so rich. Combat has always been Trine's weakest area, and in Trine 4 it might as well not have turned up. All the enemies in the game are "nightmares" made manifest by the prince, which translates to "Six or seven enemy types repeated across the entire game." Rather than being baked naturally into levels. These combat sections "appear" suddenly at set points, almost like a minigame overlaid on top of your puzzle-platformer.


There are plenty of ways to tackle these battles, from chucking boxes at enemies with Amadeus, to freezing them with Zora's ice-arrows. Yet because enemies attack all at once, it's very difficult to use these more elaborate powers. Consequently, I ended up relying overwhelmingly on Ser Pontius' stomp, squashing these phantasms into dust like an obese, tinned Mario. The combat becomes rote after a few encounters, and by the end of the game you'll sigh every time the screen turns purple.

If the combat is bad, the boss battles are worse. I don't understand why Trine has boss battles. The Ugly Duckling doesn't end with the duckling battering the swans. Admittedly, Trine 4 tries to make these encounters thematically appropriate, with our three heroes confronting manifest versions of their fears. But the stakes never feel particularly high. Ser Pontius fears being ridiculed by fellow knights we've never met before, while Amadeus fear some creepy witch aunt of his that might actually be his mum. Speaking of Amadeus, that particular boss battle, which is puzzle based, might well be one of the most frustrating things I've played all year.

Fortunately, the boss battles are few, and the combat, while tedious, is also fleeting when it occurs. Like Toy Story 4, Trine 4 wasn't a necessary sequel, but I'm nonetheless glad it exists. Here's to Trine 5: We Increasingly Regret Calling It Trine.