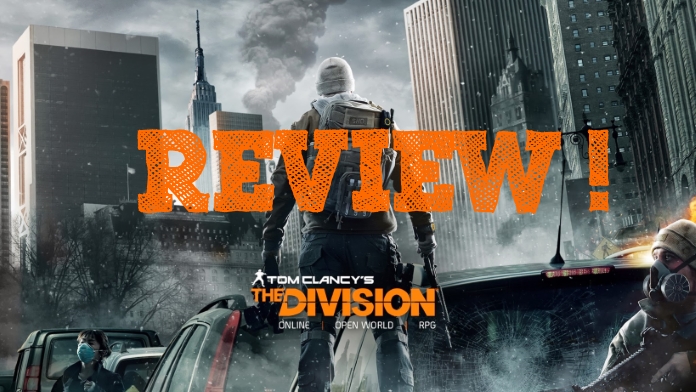 When i first saw the division at E3 i was blown away by the graphics and detail of the game, the element that caught me straight away was the co-op play and pvp straight away as i enjoy playing games with friends. You start off with been activated as a agent of a secret agency of the president called the Division that would come into effect when all other agencies have failed. This has happened in New York and you have been activated and you get to create your character, similar to previous games before it (Fallout 4,Destiny) and this will be the only time you get to edit your character which i find should have been more apparent to us at the time. So my character has facepaint and shades that i cannot edit so thankfully not many care about looks in New York at a time of crisis! You start off with entering New York with agent lau who has been injured due a accident and she becomes the voice of your achievements and missions throughout the games progression. The progression of the Character is broken into two different types of leveling, the main leveling is achieved by doing main missions around the map that earn you XP and let you earn particular XP bonuses alongside earning upgrasde points for your Base of operations that require three different types of upgrades. 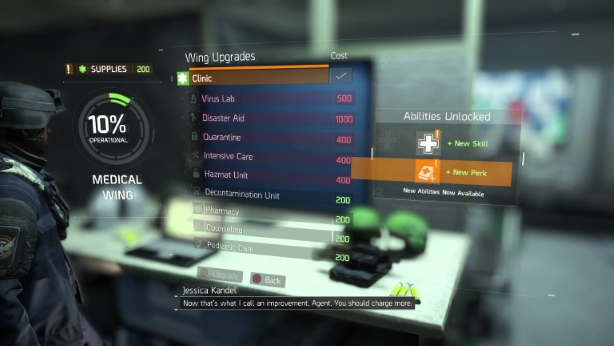 
Completing these missions earn you "Supplies" or points to upgrade each of these wings which in themselves then award you perks and upgrades to your character and the more sections you unlock the more advanced your gear can become and you can then use various upgraded sections to award you daily with items like crafting supplies and items scavenged from around New York as members of the JTF (Joint Task Force) can be found all over New York and many missions will contain them to some element most the time, mostly you saving their ass! Most of the missions for these different Wings can be easily noticed on the map by their colours, which you can see in the image below.You will also find the base of operations as a good area to come back to to re-supply and res-stock your ammunition and go through your inventory as you can't really pause the game as it's a RPG and more time than i like to admit i was attacked while i was in the pause menu going through all the upgrades, perks, weapon tweaking, as there is a lot and doing it in a safe house or the base of operations is advised. 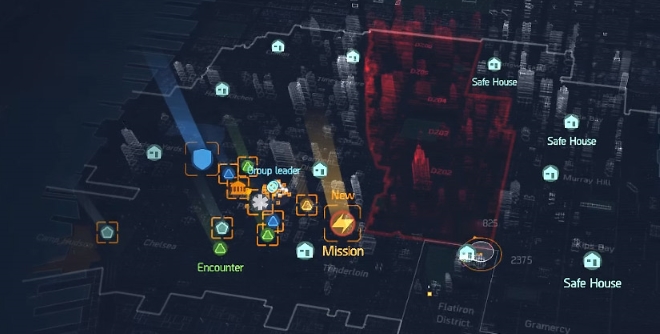 The missions in the Division are based on your current level and you can access a matchmaking option wheel outside every mission point so if you're playing solo you can invite friends into your group or join a group that is already playing the mission or about to start the mission like showcased in the video below. I found the solo game play to be a bit infuriating as the enemies were a little overpowered and i was dying time after time not been able to be a match against the many enemies. This slowly became better to manage when i started to play with random groups of other people and starting earning more XP and upgrading my weapons which became became much more powerful over leveling higher and higher and it soon became apparent that i would have to keep an eye on my abilities and upgrades and crafting to become a better agent and this element became so engrossing i wanted to keep going back to New York time after time to upgrade my character and became a better agent, consider myself reeled into the world of The Division!


It's painfully obvious that the Division is best played with friends or other agents and the missions after been completed do not disappear from the map, instead you get the opportunity to change their difficulty rating and can also try them different ways or try them with different agents. There is also a trophy you can try to achieve by playing an entire mission with a group without anybody getting downed or killed. You also get to play in what is called the Dark Zone, a PVP/PVE area of New York that is cornered off from the rest of the city that houses most of the last rogue elements of the division and most of the infected since it was ground zero for the infection in the first place. The Dark Zone is were a lot of things differ in the Division, It has it's own leveling system which is better compared to a karma type system as in the Dark zone you can lose leveling not just increase it like the leveling system outside the Dark Zone.

There is a few different levels of Dark zone you can move through from DZ-01 to DZ-6, which can be a good way to show the levels of difficulty in the Dark zone as most users should start off in DZ-01, and if you done what i did and jump in at DZ-06 first, you will be slaughtered in no time with the level of enemies in that zone was just too much for me at my level rank of 1! In the Dark zone you collect loot from enemies whether you be alone or within a group of people. You have to be careful also in the Dark zone as some people may decide to play along with you then kill you for all your items. I myself came across 10+ odd players who didn't think much of me to begin with but then turned violent on me in no time and dispatched of me in quick order. You can see all your dropped items on the map after you respawn if they did not loot them all, giving you the chance to go back and retrieve them and call in a extraction chopper which you must then attach your loot to, to get the loot outside the Dark Zone, which has the best loot and items in the game and you can see a illustration of a agent calling in an extraction in the image below. 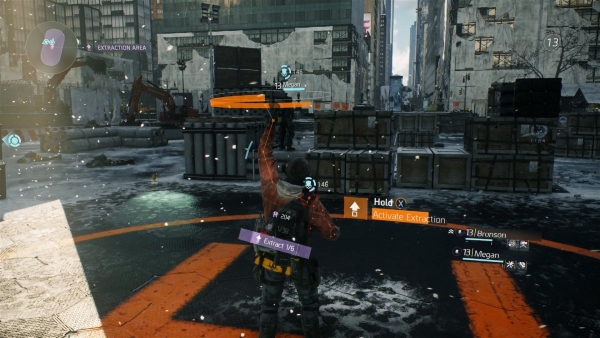 The weapons in the Division are pretty decent but what sets them apart is the type of particular weapon it is, meaning it can be standard, specialized or advanced, these are separate in your inventory by colour and can be different prices in the various gun vendors spread across the map in the safe houses or area considered as safe like the initial harbour you arrived in. Normal level weapons are grey in the menu system and good weapons in green with specialized weapons being blue, with the last been purple for advanced, an example of such is shown in the image below of a vendor in the Dark zone. You can gain a lot of credits doing missions and the Dark Zone is a great place to earn good weapons but can be hit or miss depending on the groups that are in the world with you, they're either your friends or they're not, which i suppose makes up the Dark Zone as a whole. 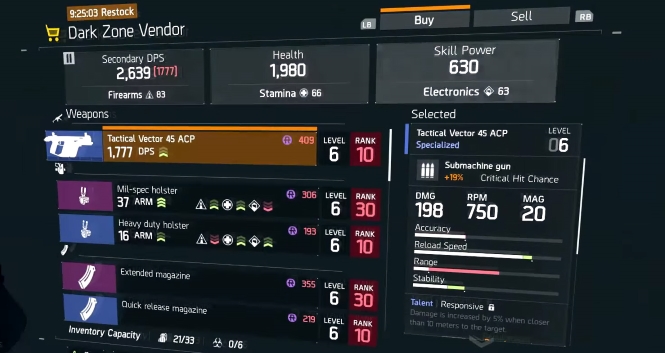 The control system of the Division is easy to pickup but in-world it can be unresponsive at time and even the blame of many kills when your character just gets out of pause or cover because a rat runs past you or a JTF officer brushes past you, or if you're lucky, you fall straight through the floor and fall to a invisible bottom but luckily uibisoft protect you here with a timer that throws you back to the map when it happens, a feature that others should adopt..nice! The small cover issues were just one annoying part specially when in limited cover in a street, but not a major issue to take away from how good the division is as a game. I enjoy playing The Division and have put plenty of hours into it already and plan to put many more into it. The game has a lot of expandable potential with the prospect of adding other cities or expanding New York in future DLC or expansion packs which is nice!

If you enjoy playing Co-op games with your friends then The Division is for you, it has enough content to keep you all busy for at least 100+ hours of gameplay and room for much more. You can play The Division solo also but the enemy difficulty can be taxing if you're on your own but if you enjoy a challenge then this may be right down your alley. While it's not the graphical end piece that we seen in E3 '15, The Division is still beautiful to look at and has room for lots more in the coming months. I found myself wanting to come back for more while playing the division and i think most will enjoy playing the division and hope to see more from it soon!