The Crew 2 is an open world racing video game developed by Ivory Tower and published by Ubisoft for Microsoft Windows, PlayStation 4 and Xbox One. It is the sequel to 2014's The Crew.

The concept of the Crew is where it gives you the oppurtunity to drive around america in many different types of vehicles, from motorbikes to buggies to high powered cars and trucks, and some new additions over the original crew game, power boats and airplanes. The Crew 2 has a switching system where you can switch between these vehicles pretty seamlessly throughout various courses and events throught the map of the US in the game. This aspect of the game has been done pretty well and works well. There are speciailist events for the different types of vehicles in the game with the chance of more added in the future.

Driving around in the game with the different vehicles can be fun and pretty enjoyable going through the map with it been quite big representing the united states and been able to race around some iconic locations like manhattan or the grand canyon. Portion of the map in crew 2 is shown below. 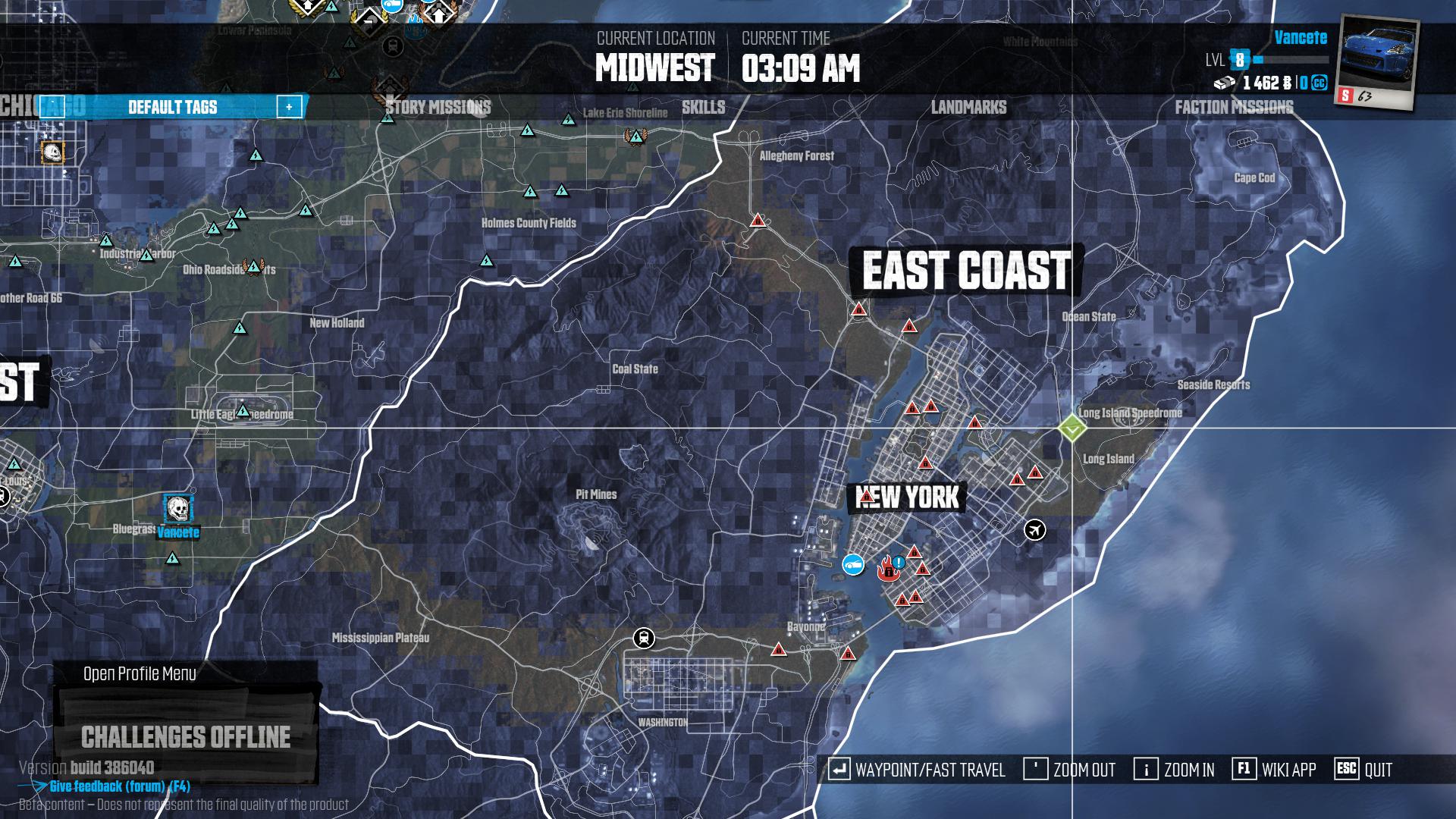 There are lots of events to participate in throughout the map and it is quite big and the image above is just a east coast view of the map that spans the USA which you can fast travel to when needed or unlocked. There are not a lot of regions in the middle area of the map to get events and other scenarios. Most main event areas are on the major cities and coastal areas of the map. You can have lots of fun just driving around the various places between the events but it can become old pretty fast if you don't see much different areas after a while. There is issues with the signage of where to drive when you can be taking part in an event and i found it fustrating at times when a turn would just pop up instantly and catch me off guard and result in a crash or having me to reverse to get back on track.

There was a simple joy just driving around trying to spot landmarks and took up a lot of my time with the crew 2 and kudos to the developers for adding so many great locations in the game. Theres something cool about driving about mount rushmore or new york in super cars that just become satisfying. 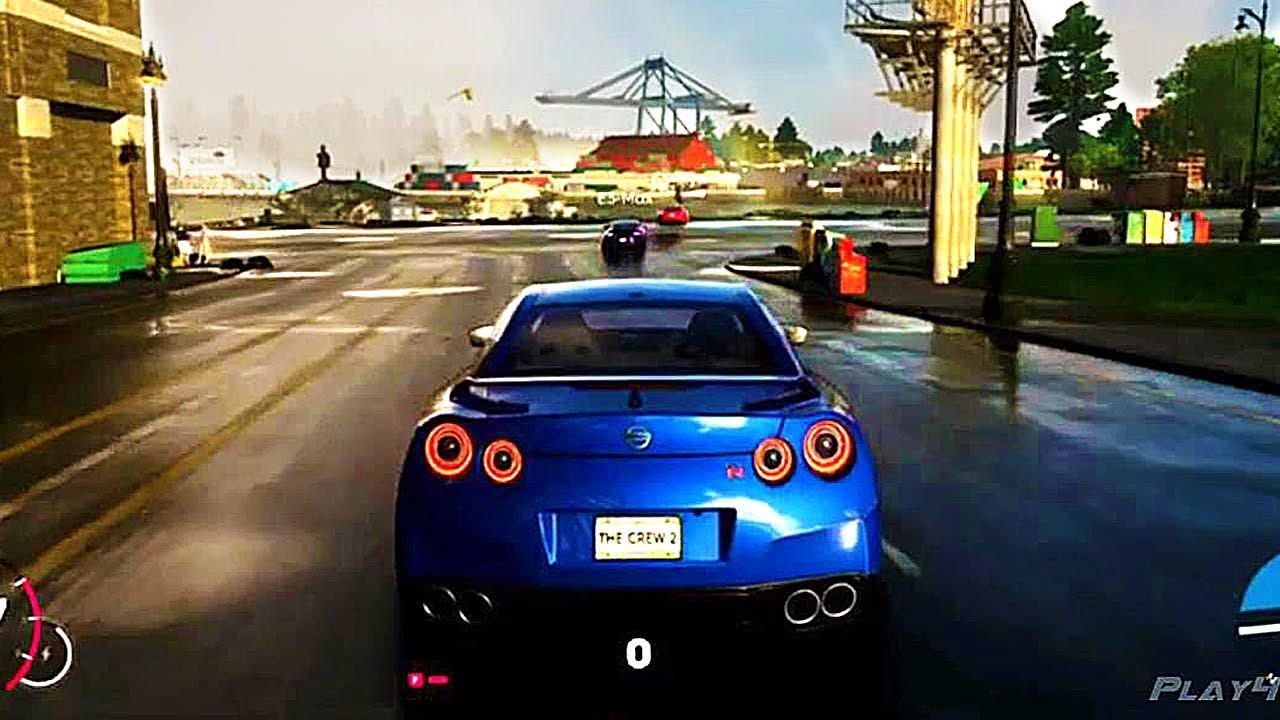 Racers can compete and progress through more than 30 events across eight different motorsport disciplines: Street Race, Drift, Rally Raid, Motocross, Aerobatics, Jetsprint, Powerboat, and Touring Car with course set to target that vehicles and offer plenty of challenges. You start off with joining a team and then getting a free car or boat or plane etc so you can race and start winning. These teams then take you on their team/crew and you can start winning events where you can collect money for upgrades and other cosmetic attributes for your vehicles.

Multiplayer is a big aspect of the crew 2 but it also a let down on for many reasons that i will speak about here. Firstly the crew 2 multiplayer works slightly like the multiplayer on other titles where you can see other players around the map and can challenge them or join them for other aspects of the crew 2 gameplay. However most times i encountered a online real player on the game, it would show them disappearing and re-appearing on my screen or they would appear in a multiple trail type effect where it would seem the vehicle was in slow mo and you can see ten of the vehicle as it moved. this was annoying as you could not get a good chance to contact or interact with these players as you could only do events together as a crew and if it didn't work half the time, it was hard to do so.

There are bonus type pickups that are around the map that you can collect in your vehicle and earn various different pickups which have colour coded items which are similar to The Division and Ghost Recon Wildlands. While these pickups are a nice addition, they just don't seem to add to the gameplay of the game in a fun way and more like a chore and that a little disappointing as the crew 2 could have been a lot more fun to play. There is no competitive racing for multiplayer and it seems a little weird not to have a more structured multiplayer experience but it has been said that this will be added in the future, but i worry about it been a little too late.

The Crew 2 looks very nice on the xbox one x with a high resolution and locked 30 fps and looks very smooth while running and given the crew 2 is such a large game, that is a good feat and pays homage to the game engine. While the engine does run pretty smoothly and the frames barely every drop below the 30 count, there is still pop up to be seen in the game, most notably the scenes that you're flying or using a vehicle that needs to see a fairly clear into the distance. The followign video is a comparison of the Crew 2 running on xbox one x and the PS4 Pro, please note the copy we tested was the xbox one x version.


As you can see in the video above, the crew 2 does not suffer incredibly from issues with it's smooth game play and barely does let up so the developers have done a great job on the title even if a higher frame count would have been nice! As noted in the comparison above, shadows do suffer in many parts of the game but can seem small compared to others like anti aliasing issues and tearing in places.

I enjoyed playing The Crew 2 but something is missing and i'm not sure what exactly it is, but i'd imagine been a big multiplayer person i'd say it's the lack of competitive multiple on the scale of other title with similar events and racing games. It really is a great looking game and i found myself just driving around looking at the great backdrops the developers have made in the game and have to give kudos to the designers on a job well done. I hope to see more added to the crew 2 and hope the multiplayer can get some well deserved updates that improve it and definitely will try them out when they land later in the year.