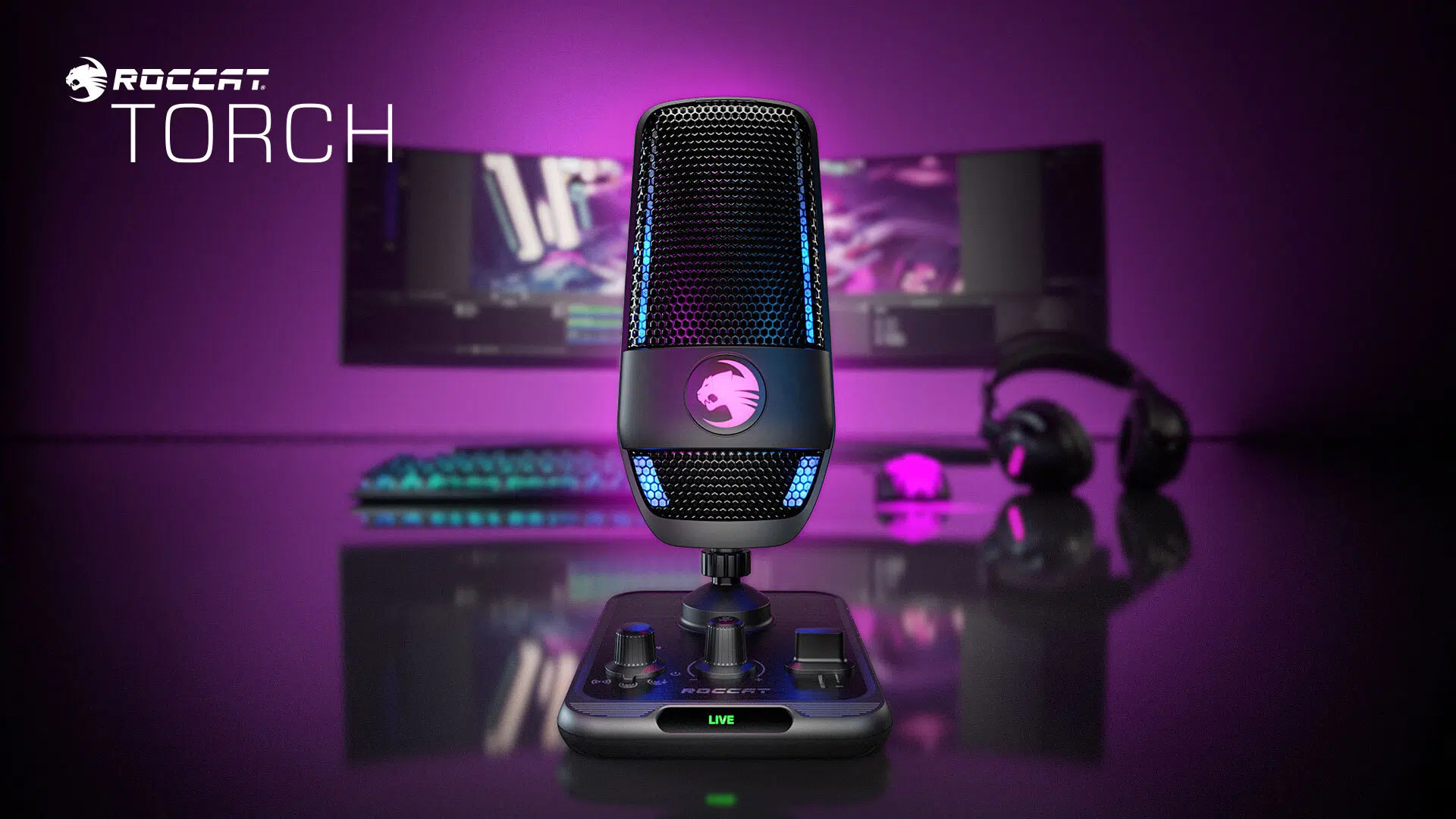 Known for their award winning line of PC peripherals such as mouse, keyboards, and gaming headsets, ROCCAT is venturing off into a new line of audio product, this time aimed at gamers, content creators, and streamers alike. Introducing the ROCCAT Torch, the first-ever standalone USB microphone from ROCCAT. To help you all decide whether or not this makes an excellent addition to that growing set-up, we have been given the opportunity for some extensive hands-on. Here’s our in-depth ROCCAT Torch review.

Straight out of the box, you’ll notice that there are a few components that come in the package. First, you have the actual Torch Microphone. This comes in a boom-style shape with some ROCCAT trademarking and RGB lighting that adds some gorgeous style to it. Then you have the base itself, which is equipped with a couple of sound dials and sliders. Then there are the two USB-C cables, one long, and one very short.

For those with an arm mic stand, the Torch should fit most of them as it uses a standard mic thread size, though for the purpose of this review we’ll stick to using what’s included.

There isn’t a whole lot here, which is a good thing because putting the microphone together only took a few steps. Without reading the instructions, I was able to assemble the Torch in just a matter of minutes, as parts twisted and snapped on with ease. And it looked super clean by the end of it without excessive wiring.

This ,then, brings me to the next bit, its overall design. 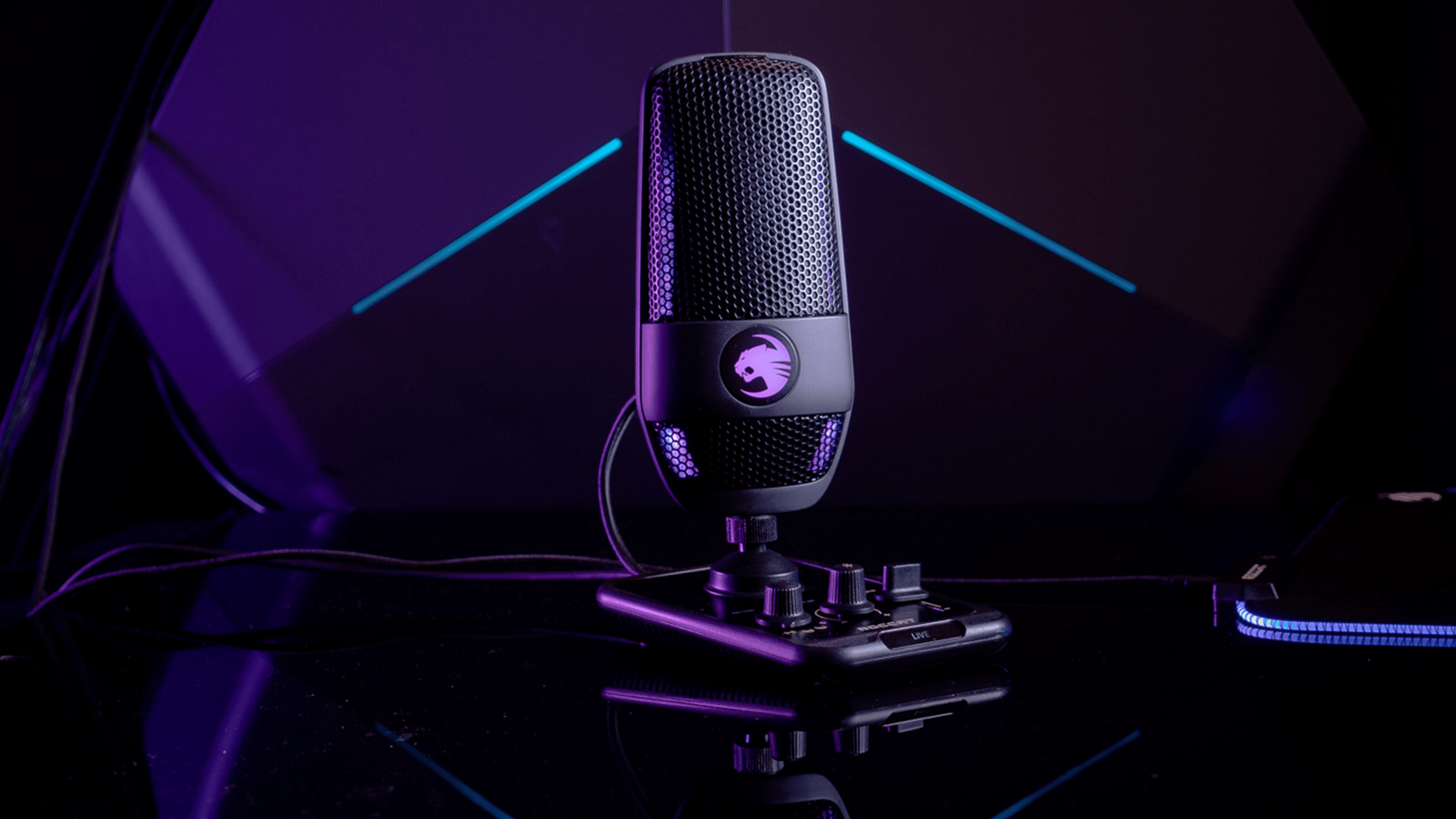 I’ve praised ROCCAT in practically all our product reviews, and I will do it again here by saying that this is a company that understands style. This time around, by producing exquisite designs with gorgeous, well lit RGB lighting. The Torch is no exception to that as it is one incredibly beautiful microphone.

Much like many of their recent PC peripherals, the Torch features the same signature bionic shell with honeycomb design, though one more prominent as its fully exposed rather than underneath the casing itself. Makes sense considering the general look of microphones, but I really love that design in the Torch, coupled with its not-so-flashing RGB lighting.

On the base, there are three distinct pattern modes (more on that later) that users can select from, each having their own dedicated RGB color. Further, there is a gain slider that has low and high settings that directly affects the RGB. If you lower the gain you can actually see this on the Torch itself as two sets of RGB bars on each side will change based on the position of the gain slider. It’s actually brilliant that it does this, as it provides you with a way of knowing exactly where your gain levels are.

Touching more on the base, in addition to the pattern knob and gain slider, there is a volume dial that controls the desktop audio volume. A nifty, quick and easy to access function. Additionally this dial can also be pressed down to mute the microphone with a display indicator on the front that lets you know when it’s muted (mic turns red to) or when you’re live. 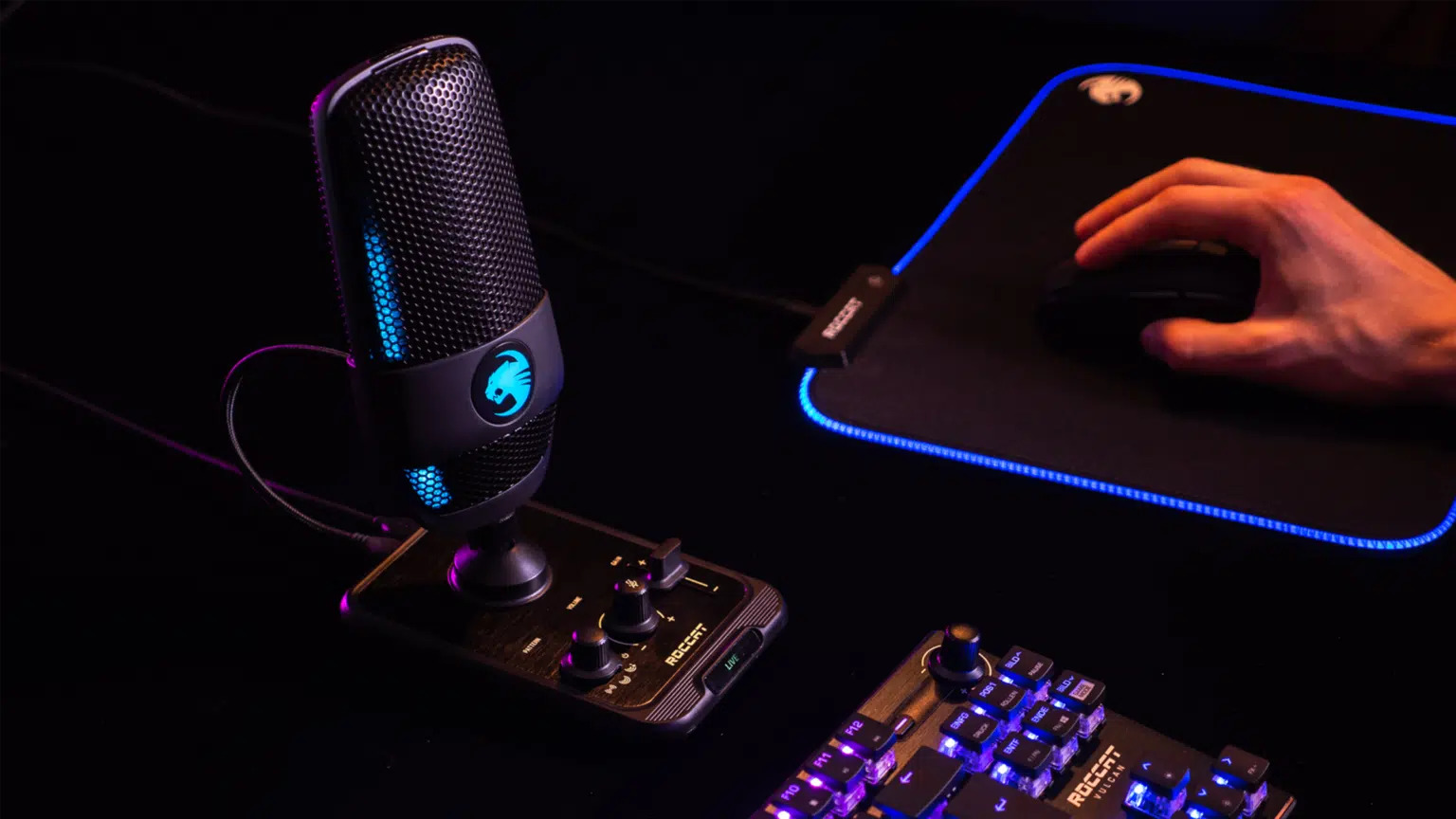 On the backside there is a light level switch that you can alternate from high, medium, low, to even off if you aren’t a fan of the RGB lighting. Next to that, there is a motion sensitivity with high, medium, and off. This is for the sensor at the very top of the microphone that allows an additional way to mute the device with a simple hand swipe. I’ll admit, this is a dumb feature, but it’s one of those dumb features that you can’t help but love once you start using it, which I found to be more often than the actual button press.

Honestly, I really love how the out of the box experience is with the Torch. The base is a smart and an easy way to let users jump directly into things without any needed knowledge of software related tools that other microphones need.

Of course you can couple the Torch with software to further customize specific settings, but for a newbie like me who prefers things to just work, this is a fantastic entry level microphone. Streamers will absolutely love the Torch for it’s beautifully crafted design, but I suppose the big question is, does it actually produce studio quality sound that ROCCAT markets?

You know, despite loving the design of the Torch microphone, I did have my worries about the overall microphone quality. I mean, it’s priced at $99, which is fairly “cheap,” and I’ve also spent a good chunk of this review gleaming at the Torch design. There has to be a “but” right? Well no, I just friggin’ love the design that much, and the audio quality itself holds well above the paid value.

Now, I don’t want to over exaggerate the Torch microphone quality in any way, because truthfully you can probably find an alternative that sounds better, and the term “studio quality” is open to a lot of interpretations. However, when you consider that this is mostly a gaming and streaming microphone, that puts that studio quality sound in a better scope. So how does it fare during gaming, streaming, and even podcast use?

Stacking the Torch up against some of my dedicated headsets, there was a huge difference in overall quality with the Torch being the victor. From the feedback received from both friends and co-workers, they noted that my voice sounded superbly clear when using the Torch microphone.

Hearing myself in a short recording, I, too, was impressed by the improvements offered. Now, there was a bit of background noises that the Torch would pick up on, but all in all, it was a pretty crystal clear experience. And again, this is just using the Torch default settings, as previously mentioned there are some dials with separate sound modes on them. However, regardless of what mode you select, the Torch has a very cool standout feature., and that would be its automatic gain control, which helps level out gain levels whether they’re high or low. You may not know exactly what that means, but most likely have been on the receiving end of where someone’s voice is either too loud, that it causes distortion popping from your speakers, or too soft where you can’t hear them. With the automatic gain control, the Torch solves those instances as it attempts to normalize one’s voice.

So for example, when you move away from a microphone it’s normal for your voice to have less volume to it, and if you move closer then it’s louder. That’s how sound works, but with a microphone you’re never too sure whether you are too loud or too quiet unless otherwise pointed out. The Torch solves that by increasing the volume of your voice when it’s too low, and decreasing when it’s too high. It’s a very seamless process that requires no manual work whatsoever.

Going back to the dial, there are three modes that can be selected from which are; cardioid, stereo and whisper. In cardioid the Torch picks up sound directly in front of it. So for gamers and streamers, this will give you the best, clearest results out of the three modes.

With stereo mode, this will open up the Torch microphone to more sounds as additional channels on the left and right are activated. This works best for those wanting to capture sounds from multiple sources. Not one I personally used since I game and chat, but it’s there for those interested.

My favorite of the bunch is the whisper mode. Just like it sounds, this mode allows you to talk in a whisper for those late night gaming sessions. Living in a full house, I find myself always talking in a low volume in order not to wake anyone up. With the Torch I don’t have to worry about anyone not hearing me in game or in chats because it’s whisper mode ensures that I will always be heard. It works spectacularly.

You know, I want to say that the Torch is an excellent starter microphone for any gamer and streamer out there, but honestly calling it a “starter” microphone would be a huge understatement. It’s more than just that, and while there may be some better sounding quality mics within the $99 price range, what you get with the ROCCAT Torch versus what you get there just doesn’t compare. The Torch is loaded with so many top of the line innovated features that it feels like an absolute steal, a deal too good to be true, only it’s real and it’s well worth the price of admission.

Whether your a content creator looking to spice up that streaming set-up with some amazingly, well produced RGB lighting effect, or a gamer just wanting to have a high quality microphone without the hassle of dealing with overly complicated software, well look no further as the Torch delivers. Crystal clear sound quality, with killer features such as the automated gain control, as well as with what I may consider to be one of the best designs to come out the ROCCAT factory, the Torch USB microphone debuts with what many could consider to be one premium experience.

ROCCAT knocks it out with their very first standalone microphone, and hopefully it’s not the last from them.