Xbox Live New Games with Gold for May 2020 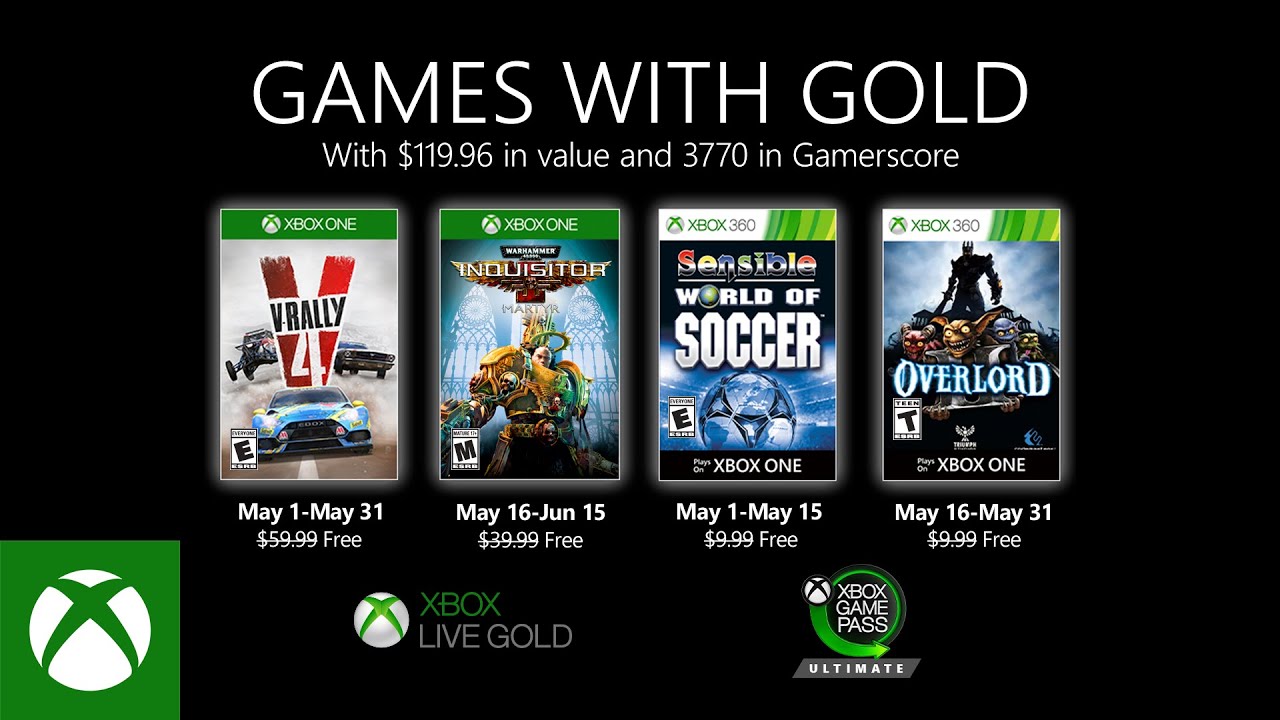 Start May the right way with the new Games with Gold lineup. On Xbox One, handle extreme and challenging courses around the world in V-Rally 4 and combat demons of the Chaos Gods in the action-RPG Warhammer 40,000: Inquisitor – Martyr. On the Xbox 360, and Xbox One via Backward Compatibility, you’ll score a goal with the classic Sensible World of Soccer and it’s minion madness in the delightfully despotic Overlord II.

Xbox Live Gold members will have exclusive access to these games for a limited time as part of Games with Gold. With Xbox Live Gold, you get the most advanced multiplayer service, free games, and exclusive member discounts on games in the Microsoft Store — get Xbox Live Gold today to get in on the action or join Xbox Game Pass Ultimate which includes all these fantastic benefits plus access to over 100 great games with Xbox Game Pass.

V-Rally 4
Take on the challenges of rallycross, drifts, buggies, and hill climbs in V-Rally 4. Over 50 famous vehicles are available to customize and race in this demanding simulation. You’ll dominate dangerous roads and hostile conditions as you set off on a spectacular journey across every continent. Let your adrenaline boost your reflexes in this legendary off-road racing game.

Sensible World of Soccer
Hit the pitch in the popular old school title, Sensible World of Soccer. Featuring a massive lineup of football clubs from around the world, enjoy a quick game or experience the excitement of managing a full season with a fully immersive tactics editor. This is the classic football game from the 90’s, reborn.

Overlord II
Control the powerful and chaotic Minion army in their battle versus the Glorious Empire in Overlord II. In this sequel to the critically-acclaimed warped fantasy hit, the Minions return smarter, deadlier, and funnier than ever as their wild pack mentality squares up against an organized legion. This game is bigger, badder, and beautifully destructive.

Read more about our Games with Gold program here and stay tuned to Xbox Wire for all the latest news on Xbox. Like we said before, if you’re an Xbox Game Pass Ultimate member, you have all the benefits of Xbox Live Gold, plus over 100 high-quality console and PC games that you want to play. New games are added all the time, so you’re never without something new to try when you’re looking to find your next favorite game. If you’re new, or if you’re an existing Xbox Live Gold and Xbox Game Pass for Console member, join or upgrade today for just $1.
You must log in or register to reply here.
Share:
Facebook Twitter Reddit Pinterest Tumblr WhatsApp Email Link