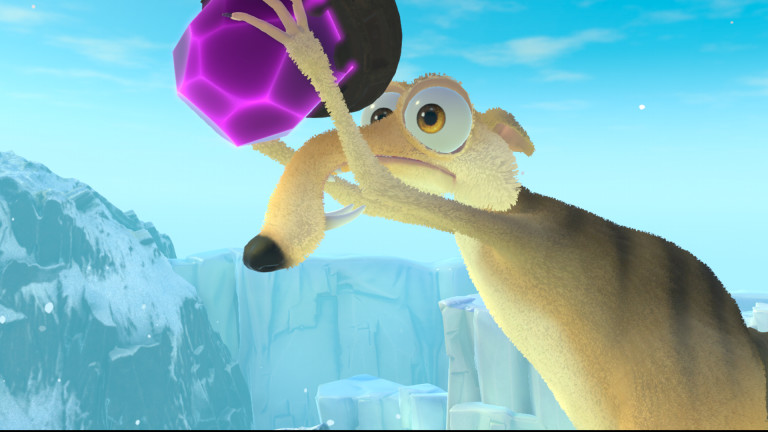 The last Ice Age film or short came out back in 2016. There has been the talk of a new film or TV series, but nothing has actually released in the last 3 years. Until late last week. For some reason the world received a new Ice Age video game, starring Scrat. It’s weird that three years after the last film we get a new game. What’s even weirder is that this game isn’t bad. I’d even say, I like it. Seriously.

Ice Age: Scrat’s Nutty Adventure was released for PS4, Xbox One, Switch, and PC on October 18th. It stars Scrat, that weird and overly hyper squirrel (?) who is always looking for a nut. At the start of the Scrat finds ruins of a technologically advanced ancient squirrel civilisation. To unlock the secrets of the ruins and become powerful, Scrat needs to track down three super nuts. This is all real. I’m not making any of this up. Honestly, it isn’t that weird considering the last Ice Age film had a plot that was entirely put into motion by Scrat poorly operating a UFO.

The actual game is a fairly basic platformer with some light combat elements. The levels have a solid amount of variety and visually, these look pretty good. You hop around these levels, collecting gems and finding hidden items. You know, a video game. Nothing amazing.


The thing is, this game and its wild story reminded me of a lot of those licensed games we use to get back in the PS2-era of gaming. And it’s odd to feel this way, but I think I miss those games? Sure licensed games still exist, but they’ve all mostly moved to mobile platforms. Which is sad. Sure many of these licensed games were bad, but not all of them. And as a kid, it was so cool to play a game on my TV based on a cartoon or movie I loved. Scrat’s Nutty Adventure feels like one of those games like it was frozen back in 2003 before it was published and only now, in 2019, has it been thawed out and released.

There are some annoying issues in Scrat’s Nutty Adventure, for sure. The camera can bug out in places, animations don’t always look great and combat isn’t fun at all. But damn it, I still enjoyed it. I sat down to only play it for an hour, just to grab some screenshots and get a feel for it. But I ended up playing it for nearly 3 hours.


It’s weird to have a nostalgic reaction to something brand new. I don’t even like the Ice Age films or have any strong feelings about the franchise. But playing a colourful and simple licensed platformer did activate some part of my brain and made me happy.

It is very VERY easy to look at screenshots of this game or the trailer and dismiss it or make fun of it.

But if you ever played and enjoyed old PS2 platformers, good or bad ones, and miss those games, you might want to check out Scrat’s Nutty Adventure. I’m not promising some incredible, marvellous video game experience. Instead, I’ll promise a simple and fun little platformer that feels like it fell off of a Blockbuster rental shelf, circa 2003. A game you play for a weekend, enjoy and probably never play again.

We have a lot of great indie games out nowadays that recreate NES or SNES gaming experiences. But for many people today, they grew up playing games on the PS2 and Gamecube. And this Ice Age game, even if it wasn’t built to be, is a perfect love letter to a type of game from that era that we don’t get anymore.