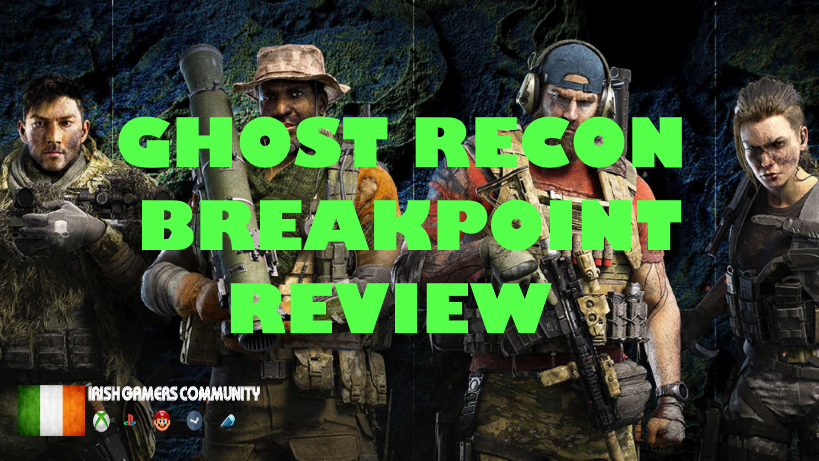 What is Ghost Recon Breakpoint?

Ghost Recon Breakpoint is a Tactical Shooter from the Tom Clancy franchise of games by Publisher Ubisoft that is an open world game set on an island called Auroa where a protagonist called cole walker has taken control of a weapons company called skell and is a former Ghost and leads a band of other soldiers called wolves. Ghost recon breakpoint is a co-op game at heart and allows 4 players to join up and take on main and side missions to help free auroa citizens and skell employees. Ghost recon wildlands was a return for the ghost recon franchise from a long break since the PC release of Ghost Recon Phantoms, a free to play title for Windows. Both wildlands and breakpoint use the Ubisoft AnvilNext 2.0 engine. Ghost Recon Breakpoint improves on Wildlands with a improved character creator and loot and gear level system very similar to Ubisofts other title The Division 2 which i will elaborate later on. 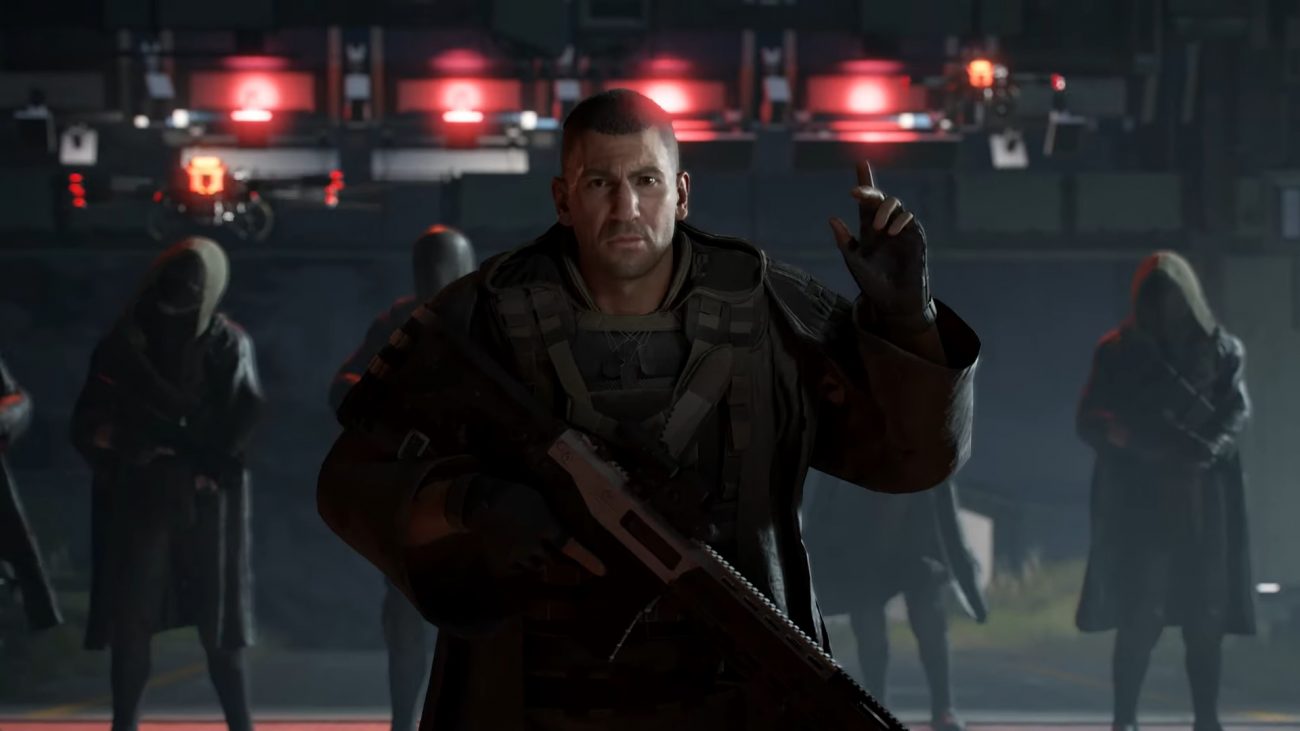 When You start off with Ghost Recon Breakpoint, you get to create your character, whether it is a male or female Character. You can change the usual features like hair colour and eye colour and also add scars and face paints. The character creator is an upgrade on the one previously available on ghost recon Wildlands but offers most of the same features like tattoos for both arms, facial hair and also you can change the clothes on your character either by buying the clothes in the in-game shop or by picking up the items in the game with the loot system. You can open the character customization screen at anytime during the game. There is full kits dubbed "Figures" that you can buy with external currency or earn via the Ubisoft Club that include the original nomad skin from Ghost Recon Wildlands. 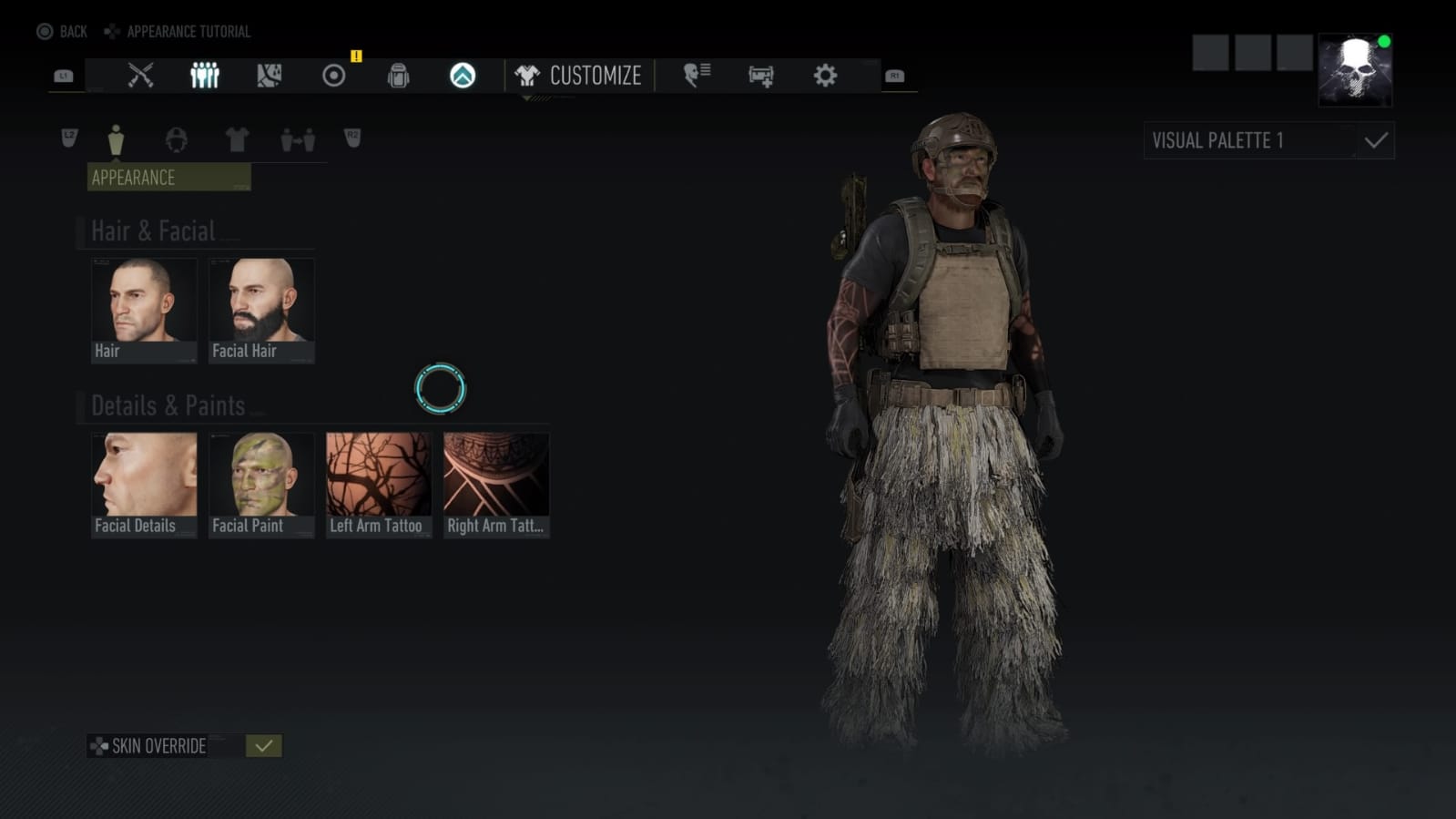 Like games before it, Ghost Recon Breakpoint has a central hub that you can start missions or join other game modes like Ghost war or Raids and is centrally located in a cave called Erewhon , which also contains a number of characters from the main story-line which see you going back to this location to enable further missions or gain more intel about other characters to open missions up like below. 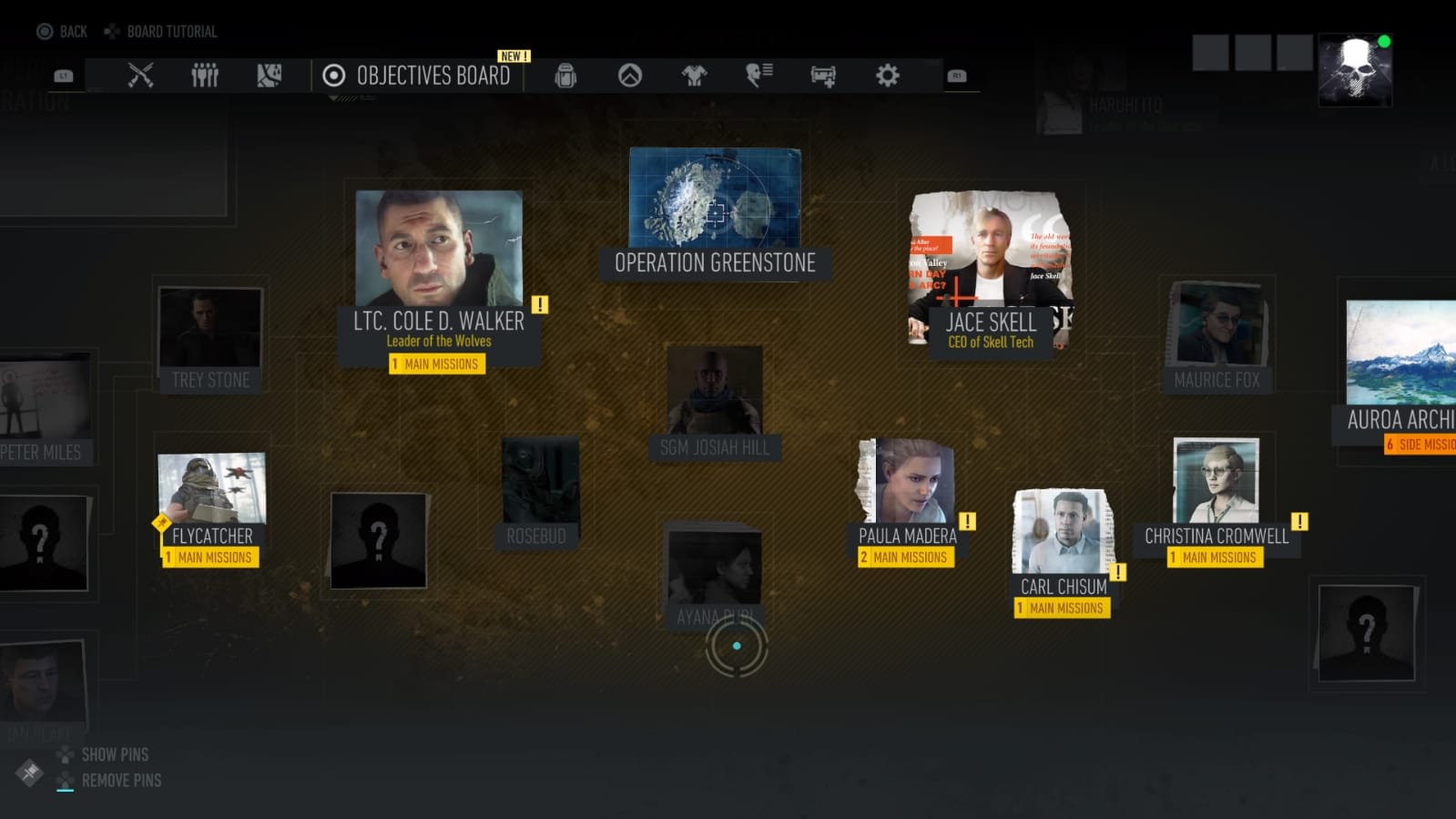 While in Erewhon, you also have a big mission briefing table which can contain friends characters who also play Ghost Recon Breakpoint, even if they're offline at the time of your game, you can check some of their statistics and profile here also by walking up to them and pressing R3. Erewhon also has it's own bivouac that you can access the shop and use Skell credits that you're looted in the main game and taken from wolves or mission rewards. You can activate 60 minute boosts called preparations in which you can select a particular boost from stamina boost from eating to tech boost to improve drone usage. 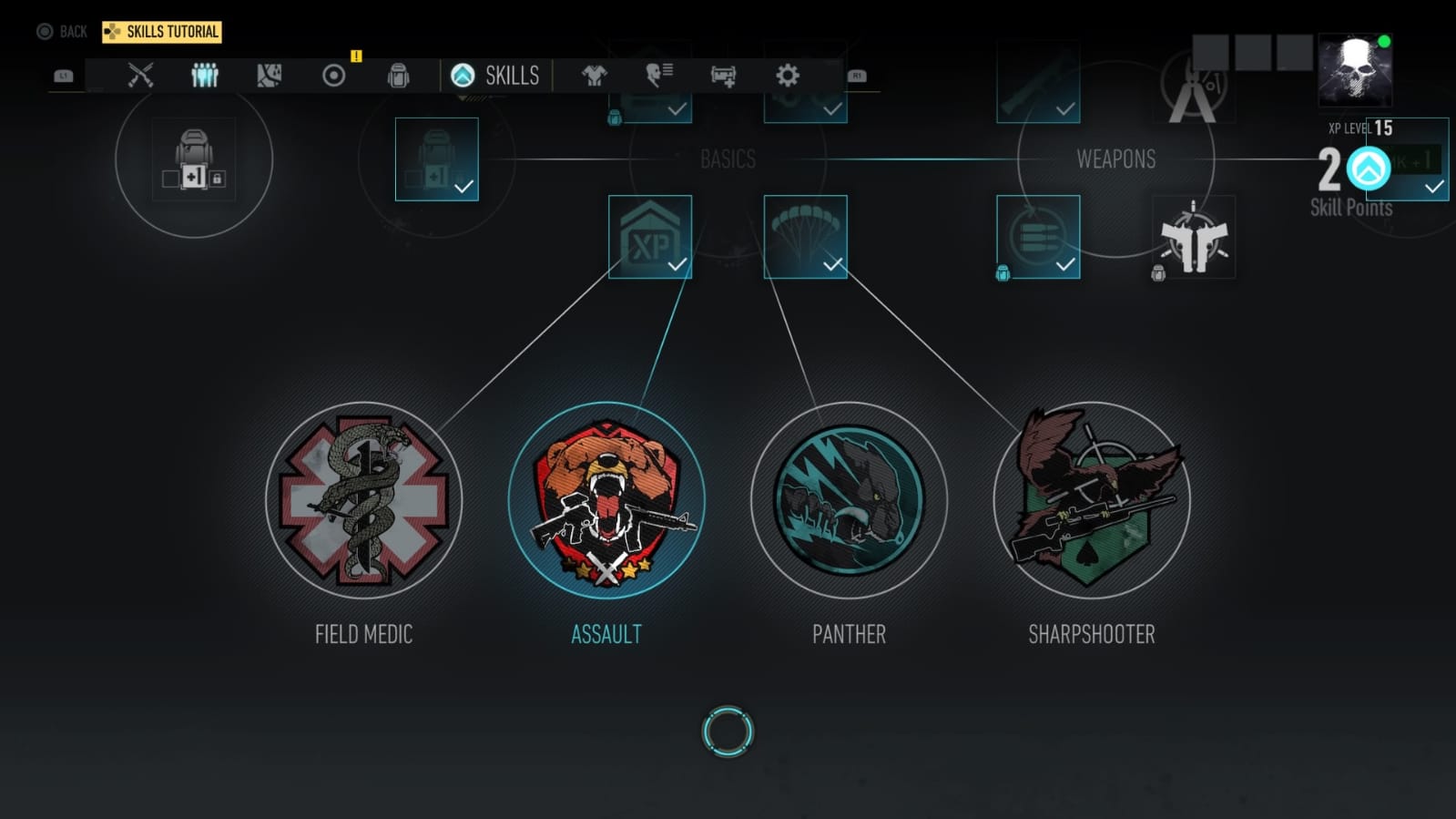 There Are currently four classes in Ghost Recon Breakpoint shown above, I've only really been using the Assault Class but they seem well evenly laid out when it comes to perks and abilities. One benefit is the Field medic been able to revive themselves which is a nice option to have on your 4 man team when things get out of control. Above these classes is a skills tree that branches off into many different types of skills that can be unlocked by earning skill points in-game whether it by main or side missions or finding them spread around Auroa in loot boxes. These skills can differ depending on the class you're currently using and can be beneficial to focus on unlocking your class related skills first as i done with unlocking most first skills associated with assault class.

Most Missions allow you to see what you will earn when you have successfully cleared that mission or it may be a an attachment for a weapon that is perhaps in the wilderness or in the middle of a complex. I have not tracked down a lot of the weapons attachments but there is plenty in the default shop to keep me going to gear score over 70 so far. Like the Division 2, the various ranked loot and weapons have a colour related to their level, Green and Blue usually meaning entry level and Purple and Red been higher level with Elite/Legendary weapons been Yellow coded. At the time of writing this review i was just starting to get purple drops from kills and loot boxes and i am at Gear level 74. 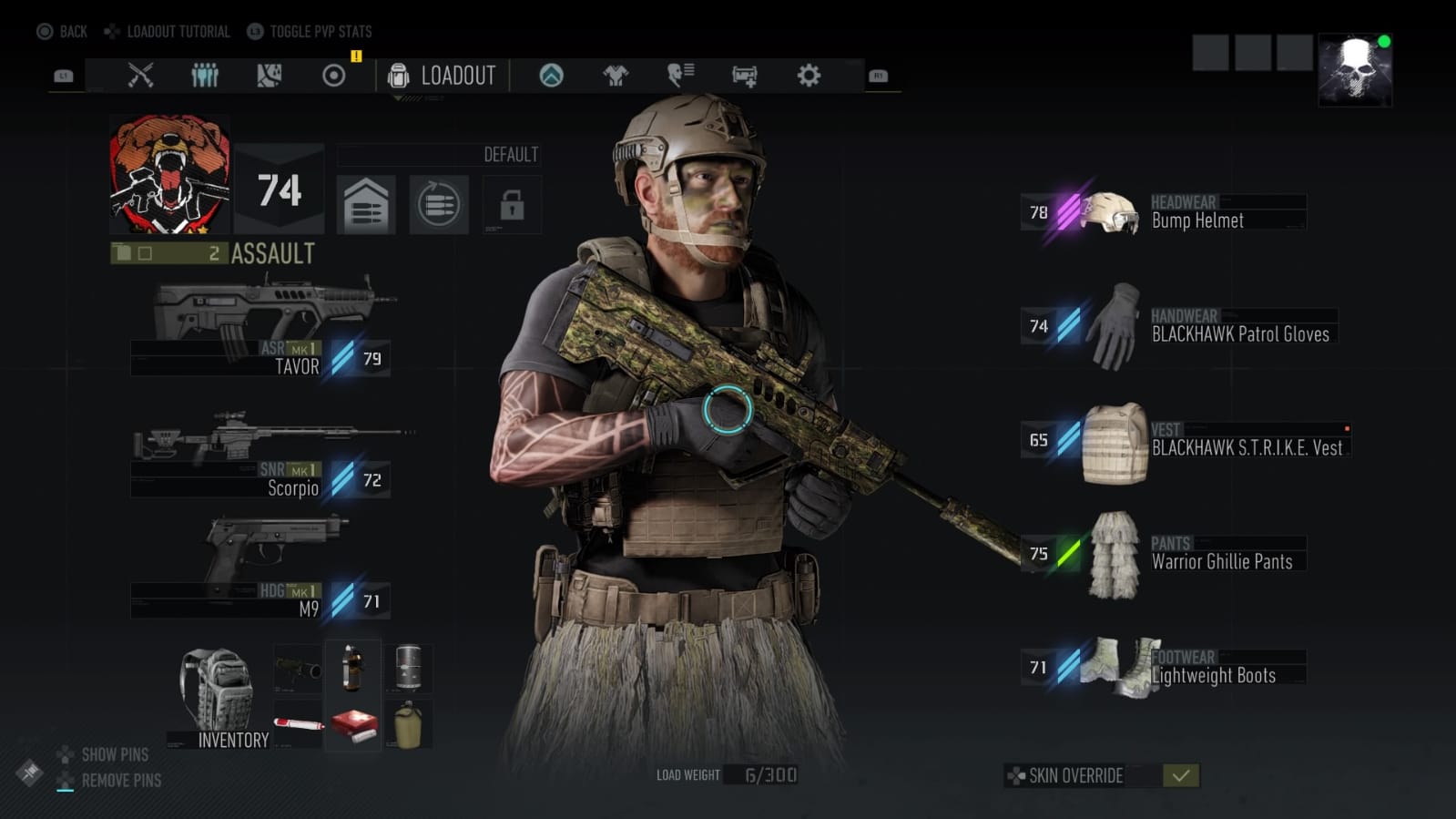 You gain XP level alongside your gear score which like Divisions, is a average score calculated from all your gear you currently have equipped on your character and as of this Review, The XP level is capped at 30 and gear score at 250 respectively. You get to carry three weapons, Primary, Secondary and Hand Gun and sport a backpack also that can carry various earn-able items whether it be from missions or bought in your store while you're in your bivouac, which i will talk about soon. Weapons can be adjusted and attachments added and removed, which also come with accolades that can booted to changed the weapons MK level, which all weapons have a max of MK 3 at present. I have unlocked MK 3 via skill points but i haven't kept a particular weapons long enough to upgrade it past MK 2 which requires parts that come in different variations of parts from dismantling weapons, like the Division 2.

I will likely spend that little longer on upgrading my primary and secondary weapons to MK 3 when they're higher level like Purple or Yellow Exotic level. The feel of the weapons can really differ also, with short burst SMG's have a bigger recoil and upgrading the MK levels can help with compensating that with angle grips or stocks or adding handling perks also. The left and right shoulder view while shooting can be toggled by the R1 shoulder button but an irritating issue keeps changing it automatically in the game losing your ability to keep it locked to that shoulder and only change if i wanted it to so at present i had to toggle it way too many times.

Ghost Recon Breakpoint went through Several Alpha and Beta tests and the game seems to have many bugs that were not fixed during these test periods or where and have not been fixed yet since the game didn't actually have a day 1 patch as far as i can tell which still be on the way with version 1.0.2 coming 15th October. A lot of the bugs in the game can be heart breaking from a mission just vanishing or just not working like it should, and a lot of graphical issues with fast travel putting your character actually under the map instead of straight to the bivouac that you wanted to fast travel to like the image below. 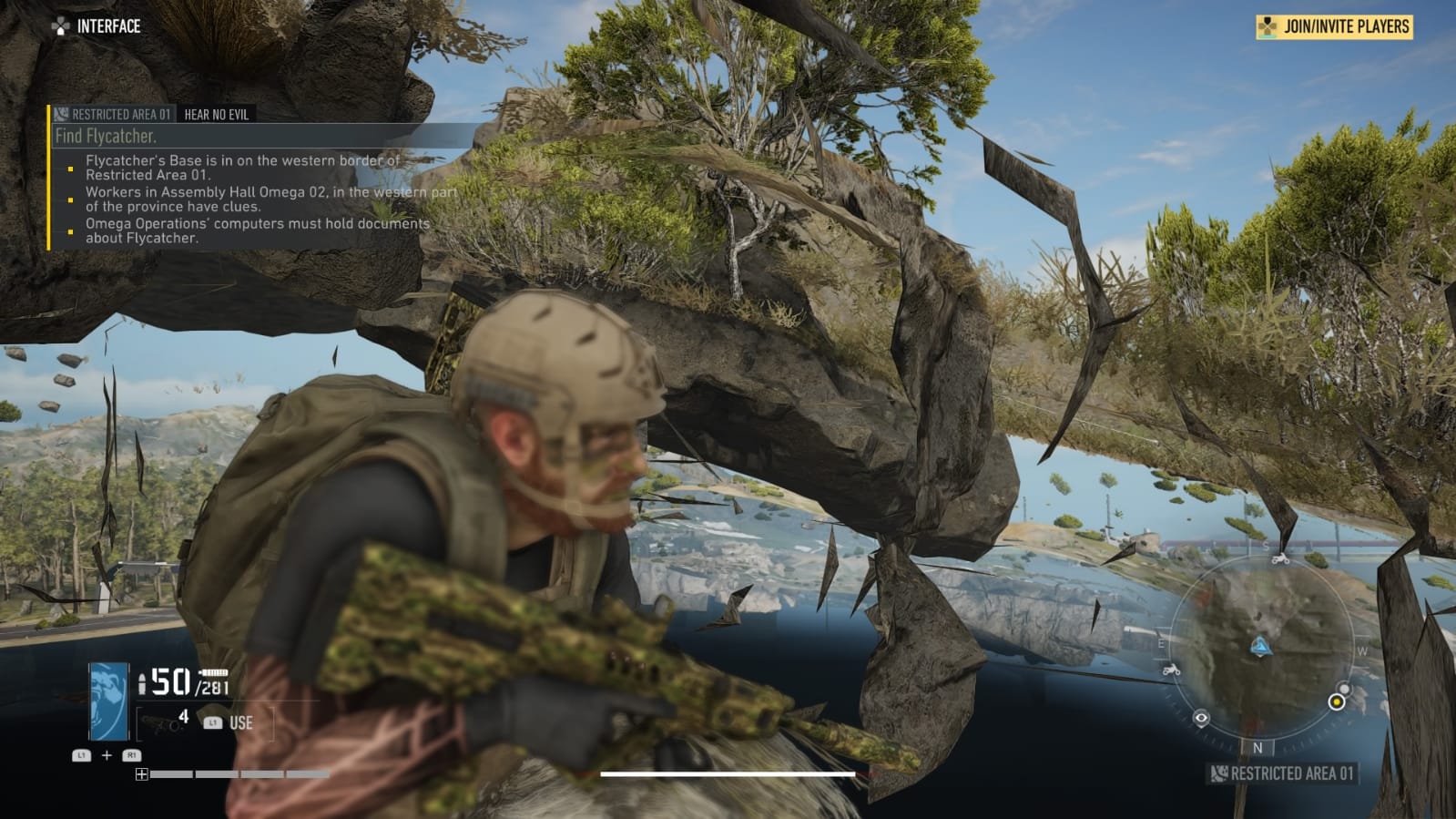 Ghost Recon Breakpoint also comes with a new animation system similar to The Division 2's and is quite buggy at present with it been hard to get over basic steps or rocks and sometimes your character just has a dis-figured look or there is a drone sticking out of your character or your character loses the ability to put out your drone, which is a important part of the game mechanics and almost makes the game unplayable until you logout and back again or other workarounds...some of which are even listed on the ubisoft forums at time of writing this review. One major issue is with the respawn mechanics while playing co-op with your downed partner respawning half a map away from you when they die during a fire fight making it almost impossible to get back to help in a timely manner.

I Have played Ghost Recon Wildlands for hours with friends and despite bugs i always enjoyed my time playing it and i doubt this will change much with Ghost Recon Breakpoint although i will admit it needs a lot of work to be as stable as it's previous title but then wildlands was available offline as well as online with breakpoint is only available online this time. Ghost Recon Breakpoint has a lot of promise and i hope Ubisoft will deliver and fix the obvious game breaking bugs at present and it becomes stable. I have enjoyed my game sessions and will continue to play breakpoint with my friends and sometimes complete random people online as it's one of those titles that really comes to light with friends and other players. I know there are patches and updates coming soon for breakpoint that could fix a lot of the issues i listed in this review but i will have to score it from the state it is in at present and the obvious bugs just can't be ignored.

All in all, I hope to see good things coming to Ghost Recon Breakpoint in the future.