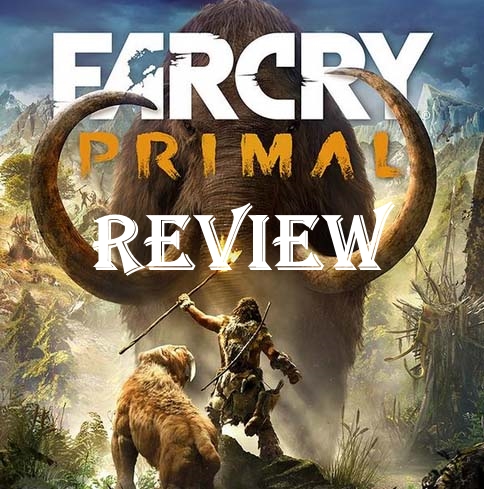 Having played all far cry games before primal, and a avid far cry fan, i was looking forward to getting into Far Cry primal. The first thing you will notice about Far Cry Primal is the removal of any multiplayer or co-op options that have been in most far Cry games before it. I was reluctant to accept the removal of these key features of far cry as most of these feature where what made a far cry game..a far cry game. I had spent many hours playing co-op with friends in the past and i always enjoyed that you could jump in and out of friends co-op games at will. Ubisoft promised that primal would be very different to it's previous titles, and that the exclusion of these features would be well worth it in the end.

I was a little hesitant going in thinking no guns or vehicles could make the game sluggish and tedious, maybe less enjoyable not having the many weapons previous far crys have given us that made it the game it was before, but i laid this worry to the side and booted up far Cry Primal, This been on the xbox One. The game started off straight away with you "Takkar" the character you will control hunting with your tribe trying to hunt a mammoth which soon gets taken by a sabertooth tiger which sees you fall down a embankment and starts you on your journey as seen in the video below.


The game mechanics past this point are pretty much identical to the mechanics of Far cry 4 with you needing to collect materials to craft objects and you having plants of various colours to help with crafting various objects. You get to use a somewhat senses feature to track down various items you may need on the map. You can also use this tracking feature to track blood from injured animals you're hunting or the foot prints of a enemy of tribe member or your current objective. 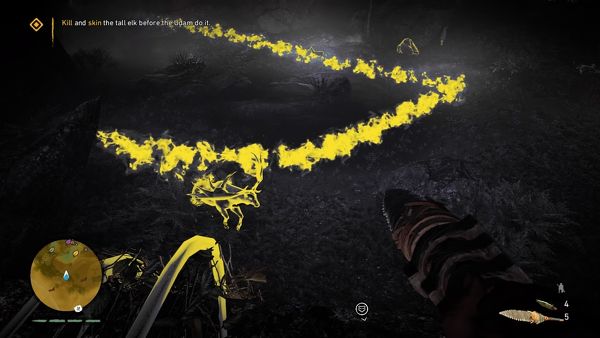 Pretty quickly into the gameplay you get to craft a bow and Spears and a mallet/axe type weapon that takes damage and can be broken after you stomp a few heads with it. You also get to collect slate which seems to be plentiful around the map when needed. To start fires you will need to collect flint and other materials needed to start campfires and outpost type places which act like the radio towers from Far Cry 4 were they reveal more of the map and territories you can then explore. When you liberate these outpost/camps, you're met with light to heavy resistance which didn't seem to pose much threat to me earlier on but i'd imagine they do get more of a challenge later on in the game.

You can light your axe/mallet on fire if you have flint and cloth handy which can be life saving as you can be overwhelmed by animals when it gets dark and the best method to scare them off seems to be waving a lit torch at them or staying around a fire/camp fire. However it felt like wolves and other nocturnal creatures were spawned almost the same place all the time at night and you can find yourself fighting the same animals all the time at night and get somewhat tiresome. Your weapons can be upgraded or repaired via the crafting menu when you click start/options, when you can craft more arrows or additional spears or axes when you need them or use the L1 weapon wheel to craft them on the fly like you did in far cry 4 to craft syringes on the fly. One real issue is there is no customization of weapons at all, so you can only use what is set and that for many die hard customization fans will not like at all. Some nice additions have been added to primal that were not in Far cry 4 like the night time fighting where you can see the bright eyes of wolves sneaking their way to you between trees ready to attack you. The various campfires have a tent? that you can sleep, a common feature of games that allow you, the player to advance time to avoid having to fight in the night time as it gets more more dense at night and you could get overwhelmed easily with your primitive weapons, which thankfully can be upgraded in the craft section below.. 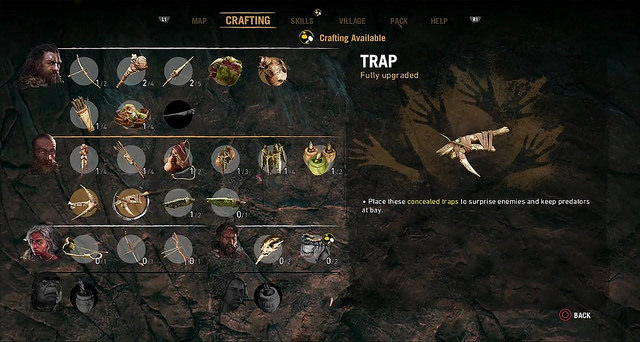 There are many things in Far Cry Primal which are for lack of a better term, too alike Far Cry 4, these include the similar functions of the Outpost/Campfire types system to the Weapons and Upgrade system to liberating them and earning more members in your "Tribe". You also have the parts of the game you go all trippy and enter a surreal world were you must undertake a crazy type mission to earn a animal spirit, which is basically the exact same as the bells and tiger from the spirit world in Far cry 4. The healing animations is a bit different and faster in primal where you eat meat to gain health back, this was a very welcome addition as far cry 4's healing animation was way too long especially when in the heat of a battle.

Some new additions are the use of various animals in the game to help you on with your journey around Oros, the Land in which Far Cry Primal takes place. You get to tame some animals that you can use in many ways which is pretty cool as they can be from owls to wolves to sabertooth tigers. After about 2 hours+ i already had the services of a jaguar, wolf, lion and owl, which was pretty cool. The mode that goes alongside this feature is called Beast master, which allows you to tame these animals and keep them in your Camp/Base in the game and use them as you need. Having a pet wolf has never been more fun! 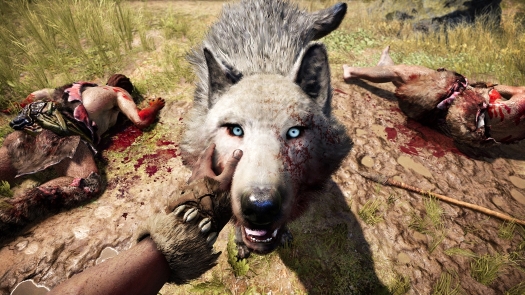 When i first heard that Far Cry Primal was to have no multiplayer or even co-op features i thought oh no, but then i said perhaps they will use those resources in the 1 Player game and improve the graphics. Sadly this is not been the case as the graphics are almost identical to Far Cry 4, however Far Cry 4 was a graphical marvel in it's own. Far cry Primal has a lot for you to do from getting new tribe members to your "communities" and getting members like "" to join them to make them much stronger as you grow their population. If you're a far cry player, you will get to grips with the game pretty quickly and it has a lot to offer in terms of playability.

Overall Far Cry Primal successfully uses the Far Cry 4 engine to create something new that is refreshing and original and not been done before in such a manner to be enticing and specifically in next gen graphics that should make Far Cry Primal a great title for the new comer. to the franchise and the die hard fans. Ubisoft didn't waste resources on the multiplayer it seems, and focused instead on a grounded and intriguing story mode, immersed in a world so raw and savage to become majestic and a far cry game at heart.

Far Cry Primal has been a vast change from previous Far cry games and while the franchise has been pretty popular, I see this as a gamble by ubisoft to move away from the Normal FPS background as all it's predecessors had been and offer something that no one has done before and by all means they succeeded. Far Cry Primal is very like Far Cry 4 in game play and visuals but sets itself apart by it's stone age background and it's story will keep you playing it for some time. One might think that perhaps Far Cry Primal is to Far Cry 4 as Blood dragon was to Far Cry 3, but this is not the case and i find far cry fans will enjoy Far Cry Primal. Far cry fans will enjoy this title and Far Cry Primal has enough to offer even the novice of users.