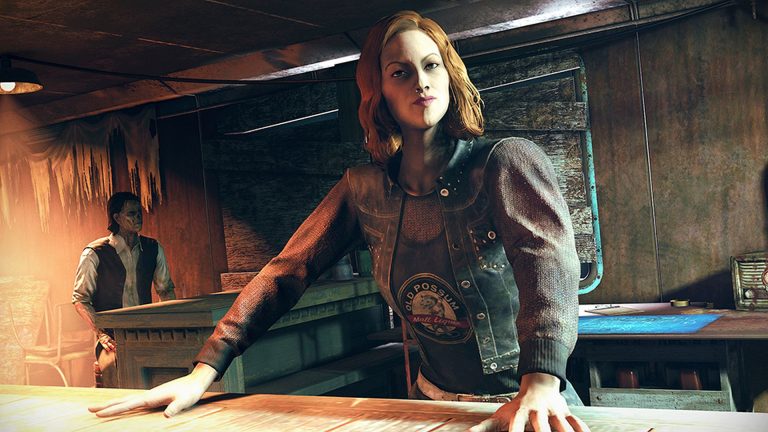 Fallout 76 Wastelanders is here and along with the return of human NPCs, it allows you to recruit companions. It’s easier said than done though with four different allies to unlock (for the time being). Let’s go over the process of recruiting each here. Keep in mind that you can only have one ally in your CAMP at a time.

First up is Beckett, who is coincidentally the first you’ll encounter in the new update. First, go to Rusty Pick and receive the “Narrow Escape” quest. It tasks you with going to a camp close by and saving Beckett from the Blood Eagles. After being set free, he’ll ask you to find his stuff at The Sludge Works – you can either fight the Blood Eagles present or sneak past them. Upon retrieving Beckett’s belongings, it’s possible to build Beckett’s Bar – this results in him arriving at your CAMP and becoming your ally.

From there, Beckett will provide a variety of side-quests which involve fighting the Blood Eagles. They all fall under “An Eagle Flies Free” and reward an achievement upon completion. The quests are:

Next is Raider Punk, who’s quite the tough man to track down – he can either be found to the north of Vault 76 or in the southeast regions of your map. You have to be level 50 or have +5 in Perception along with either “Cooperative” rank in Raider reputation or +8 in Luck. Finish the dialogue exchange with him successfully and he’ll be recruited, appearing in your CAMP later. If you’re having a tough time finding Punk, he’s also present in the Raiders base but only after finishing the story and siding with the Raiders.

The third companion is Commander Sofia Daguerre. She’s found in the abandoned bunker in The Mire after you receive a distress signal on your Pip-Boy. Travel to the lowest level and heal her with a Stimpak. After bringing her up to speed on the current state of the world, Sofia will ask you to find her flight recorder – it’s located southwest of the bunker and west of gulper lagoon. Upon using the flight recorder, you’ll have to fight off a number of Super Mutants.

Once the recorder is retrieved, you’ll be tasked with taking the encryption key from the ship’s pilot, which happens to be an assaultron called PANDORA. While it can be fought, having +8 Intelligence and consulting with Sofia about will give you a code “Blue Sunset” to shutdown PANDORA instead. Use the code on the assaultron to avoid any conflict.

Head back to Sofia and she’ll inform you that a special console is required to decrypt the key. Construct the USSA console in your CAMP and Sofia will eventually come to stay, becoming your ally in the process. From there, you can take on a variety of side-quests for her under “The Woman Who Fell to Earth.” Completing them will reward an achievement – the side-quests are as follows:

Finally, there’s the Settler Forager who’s located in Foundation. Upon reaching the base, take the elevator to the floor with Paige’s office. You’ll find an old man walking around – that’s the Forager. To recruit him, you’ll need “Cooperative” rank in Settler reputation, +6 in Intelligence, +3 in Charisma or +8 in Luck. His main role is to dole out random quests which can net you gear and weapons.

How to Find the Purveyor

Purveyor Murmrgh isn’t a new addition, appearing first in the Wild Appalachia update. However, her location has changed since the release of Wastelanders. You can now find her at the Rusty Pick in Ash Heap.

But that’s not all. The Purveyor now sells Vault Steel Scraps which can be used to craft a number of items like Solar Armor, Thorn Armor and the Strangler Heart Power Armor. Five Vault Steel Scraps cost 10 Legendary Scrips so only visit her if you have an excess of Scrips to offload and things to craft.