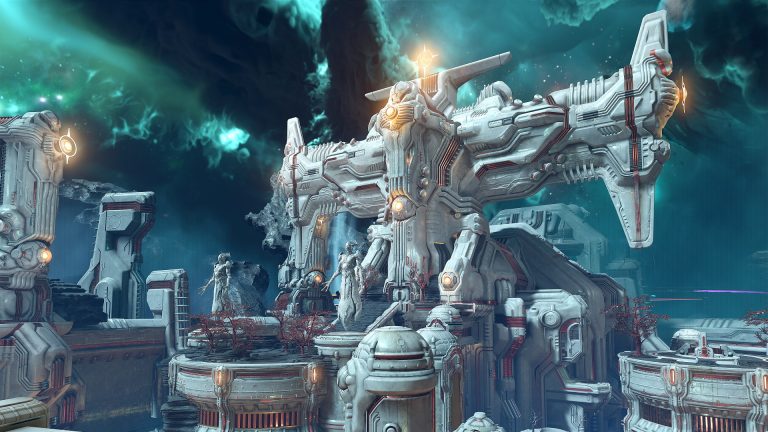 Id Software’s DOOM Eternal is nearly upon us and comes with a wide array of tools for slaughtering the hapless legions of Hell. There is a lot to uncover, whether it’s exploring the new Fortress of Doom for goodies or finding new and creative ways to kill. Here are a few tips to keep in mind that should make life as the Slayer somewhat easier.


You’ve probably noticed more Chainsaw usage than with DOOM (2016). That’s because on top of max ammo in weapons being lower, thus necessitating the need to constantly rip open enemies for more, the Chainsaw works differently. It now passively recharges up to at least one use. You still gather Fuel to add more charges but this is meant more for killing larger demons. Regardless, for the most part, it’s a good idea to cull lesser foes whenever the weapon is available.


The Blood Punch is a very, very useful new melee attack. It can decimate an enemy’s armor in quick fashion and is just great for battering medium-sized foes. That being said, it does require recharging. Stack up so Glory Kills – which you’ll be doing anyway – and your punching needs should be sorted.


With how enemy weaknesses work, you’re encouraged to use certain mods and weapons against foes to gain an advantage. This can be seen when using the Shotgun’s Sticky Bomb mod to destroy an Arachnotron’s tail or firing a frag grenade into a Cacodemon’s mouth to stagger it. Of course, it could also be something as simple as using the Heavy Cannon’s Precision Bolt to shoot the cannons off of a Mancubus or Revenant.


One of the coolest new additions to the Super Shotgun this time is the Meat Hook. This grappling hook lets you latch onto enemies and blast them up close. It serves as an excellent movement tool but keep in mind that the Meat Hook can only grapple onto enemies, not the environment. A small thing but still important.


Runes are back and arguably better than ever. One Rune in particular, Chrono Strike, adds some slow-mo to the action. When equipped, hold down the aim button in mid-air and everything will slow down, letting you line up sniper shots and target weak points with ease. The Rune drains with use and takes time to recharge so don’t rely on it too much.


Like DOOM (2016), the Slayer has different grenades. However, it’s now possible to equip two grenades at once so you can have frag grenades and ice grenades on standby. You should also make it a point to alternate between them since they’re on separate cooldowns. For even more explosive fun, use the Equipment Fiend Rune. This will decrease the cooldown of equipment when killing enemies that have been affected by said equipment. So freeze and explode foes, get the benefits of reduced cooldown, and then freeze and explode some more.

Kill or Be Killed


Found yourself on the backfoot in a fight with health dwindling? Keep pushing forward and Glory Killing. The lower your health, the more health you receive from kills. So it’s possible to back off from tougher foes, seek out weaker enemies to Glory Kill and top yourself back up in a hurry.
Ripatorium

If you want to try out any weapons or mods, or practice your skills, the Ripatorium is worth visiting. It’s essentially an arena full of demons in the Fortress of Doom. The best part is that dying won’t have any consequences so feel free to run around, killing and experimenting with different Rune loadouts.


Argent Cells are no longer fueling your constant thirst for bloodshed. Instead, you’ll be hunting down Sentinel Crystals which serve to permanently increase one’s health, ammo capacity and armor. Sentinel Crystals are also important for how they fit into the new perks system.


If you look below the typical health, ammo capacity and armor categories when upgrading, you’ll spot perks with adjoining upgrades. Spend Sentinel Crystals on those upgrades and you’ll receive a perk. For example, if you spend Sentinel Crystals on the health and ammo capacity upgrades attached to the Belch Armor Boost perk, then you’ll unlock the perk that causes enemies to drop more armor when hit by the Flame Belch. Health for Blood is also great since it allows for any health obtained to recharge Blood Punch if your overall health is full, thus letting you run around, Blood Punching enemies silly.


Like the previous game, you can find Praetor Tokens for upgrading your suit. This extends to Environment upgrades that will provide benefits like immunity to exploding barrels. However, you can also unlock upgrades that cause ammo to drop from exploding barrels and even respawn said barrels after a short period, allowing for even more opportunities to blow up foes. Or just refill ammo, whichever works better.


Once you’ve gained Slayer Keys, you’ll have the option to partake in Slayer Gates. These are optional encounters full of challenging foes – completing them will net Weapon Points and an Empyrean Key. However, any ammo or Extra Lives spent in a Slayer Gate won’t be restored once used so be careful when the gauntlet is thrown down.


Let’s talk a bit more about Extra Lives. These can be found throughout levels but they don’t work on a checkpoint or continue system. Instead, when taking a fatal blow, the Extra Life will be consumed as you’re temporarily immune to any incoming damage. You’ll recover all of your health and get a chance to reposition before entering the fray once more.


The Arch-vile returns in DOOM Eternal and its presence can make life difficult as it buffs demons in the vicinity to move faster and deal more damage. Which is bad given how frantically enemies are trying to kill you already. Find and kill the Arch-vile quickly, using a Blood Punch to destroy its shield before taking it down.


Want to collect everything in a level? You could go back using Mission Select but there’s another option. Once you’re near the end of a mission, you can fast travel back to specific regions and try to find any missing collectibles, upgrades and items. Fast travel can only be used once the mission is nearly completely but can be used as much as one desires within once unlocked.