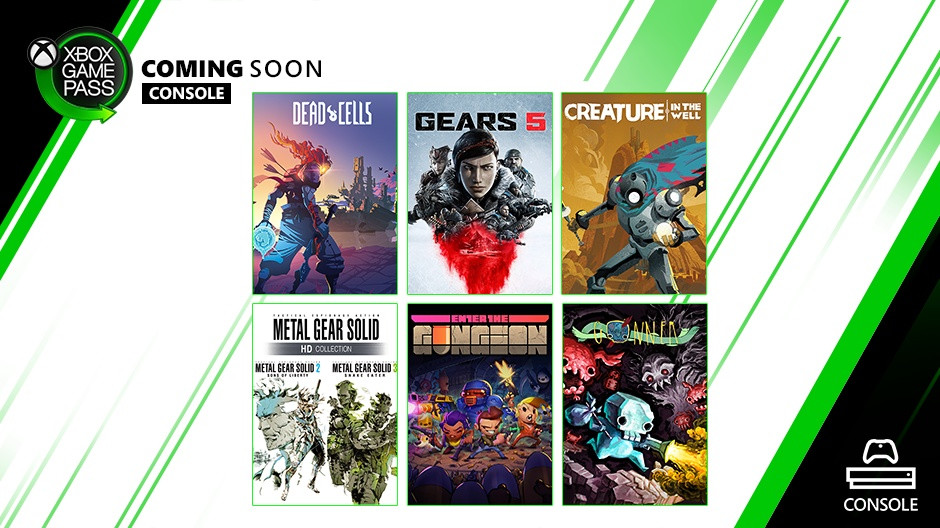 We’ve been doing this for a while now, so let’s pretend we’re new and we don’t know each other. Spice it up a little.

Hi! We’re Xbox Game Pass, and we bring you console games, PC games, and spicy memes. We like long walks on the beach (if we have to walk along a beach to get to where we play games), Sushi (great pre-gaming food), and beating back the Swarm (guess that applies to both games and real life? Both? Let’s say both.). Big bonus points if you can master your active reloads and revive us when we DBNO.

If you want to hang out this week, we’ve already got big plans on September 6… we’re going to be playing this little gem you may have heard of: Gears 5 Ultimate Edition? We’ve already downloaded the game on our console and PC, and unlocked our “Terminator Dark Fate” character pack, so we’re flexible – wherever you want to game. We’ll be the one playing as Sarah Connor along with all our other friends, and going for the level 50 Horde achievement. You in?

Dead Cells
Dead Cells puts you in control of a failed alchemic experiment trying to figure out what’s happening on a sprawling, ever-changing and seemingly cursed Island. Tough but fair combat, responsive controls, challenging foes, permadeath and of course, the emergency panic roll to get you out of trouble, make for a demanding, visceral and cathartic action game.

Dead Cells
Metal Gear Solid HD Edition: 2 & 3
In Metal Gear Solid 2 HD Edition, play as new FoxFound recruit Raiden and infiltrate Big Shell to rescue the US President who’s held hostage. Next, in Metal Gear Solid 3 HD Edition, discover the origin of the series starting in 1964 at the height of the Cold War. The fate of the world hangs in the balance as Snake must question the true meaning of loyalty as he embarks on a lone mission to kill his former mentor.

Creature in the Well
Creature in the Well is a top-down, pinball-inspired, hack-and-slash dungeon crawler. As the last remaining BOT-C unit, venture deep into a desert mountain to restore power to an ancient facility, haunted by a desperate creature. Uncover and upgrade powerful gear to free the city of Mirage from a deadly sandstorm.

Gears 5 Ultimate Edition (September 6 for Xbox Game Pass Ultimate members; standard edition available September 10 for Xbox Game Pass members)
From one of gaming’s most acclaimed sagas, Gears is back and bigger than ever, with five thrilling modes and the deepest campaign yet. With all-out war descending, Kait Diaz breaks away to uncover her connection to the enemy and discovers the true danger to Sera – herself. In addition to the epic campaign (with 3 player co-op), experience the all-new Escape multiplayer mode, compete online in Versus, team up with friends in Horde, and create custom maps with the new Map Builder. Xbox Game Pass Ultimate members get to play Gears 5 four days early, so if you haven’t already signed up, now’s the time! Sign up now and get your first 2 months for $2.

Enter the Gungeon
Enter the Gungeon is a gunfight dungeon crawler following a band of misfits seeking to shoot, loot, dodge roll and table-flip their way to personal absolution by reaching the legendary Gungeon’s ultimate treasure: the gun that can kill the past.

Gonner Blüeberry Edition
Gonner is a tough, procedurally generated 2D platformer with roguelike elements, hidden secrets, multiple endings, and challenging bosses. Play as the largely misunderstood and altruistic Ikk on a journey to cheer up his only friend in this world: a giant landbound whale named Sally. Search for just the right trinket in the deep and dark places nearby on a journey to make one person happy even if it kills him—which it certainly will.

Since we’re still pretending we’re all new here, heads up on all the perks for being an Xbox Game Pass member (that are more tangible than just being our friend, though that is a really big perk if you ask me):

You get to play Gears 5 Ultimate Edition 4 days early, starting September 6, if you’re an Xbox Game Pass Ultimate member (September 10 for everyone else). You also get the Halo: Reach pack for Horde mode, and if you play before the September 16, you also get the “Terminator Dark Fate” character pack!
Xbox Game Pass members always get up to a 10% discount on related game DLC and add-ons, but we also sometimes get even bigger, exclusive discount like how right now you can get up to 50% on over 60 Monster Hunter: World add-ons. (Are you gearing up for Iceborne? I know I am).
Finally, members get exclusive Xbox Game Pass Quests, where you can earn rewards points toward things like paying for your Xbox Game Pass membership, just for playing the games you were going to anyway. This month, we’ve got quests live for Devil May Cry 5, Sea of Thieves, and more, plus an exclusive bonus quest for Gears 5 starting on September 6. And that’s not it – any member completing a quest in September also receives the movie The Blair Witch Project!
Games Leaving Xbox Game Pass for Console

We’re constantly updating our library, which means that we also have to let some titles go so that we can keep serving fresh content. Play these games before they’re gone, or if you want to keep playing, you can purchase them with your Xbox Game Pass member discount of up to 20% off and keep them forever.


It feels like now is a great time to remind you that you can find us sharing game news (and our favorite memes) on Twitter and Instagram, and our mobile app is the Xbox Game Pass companion for pre-installing console games remotely to your Xbox.