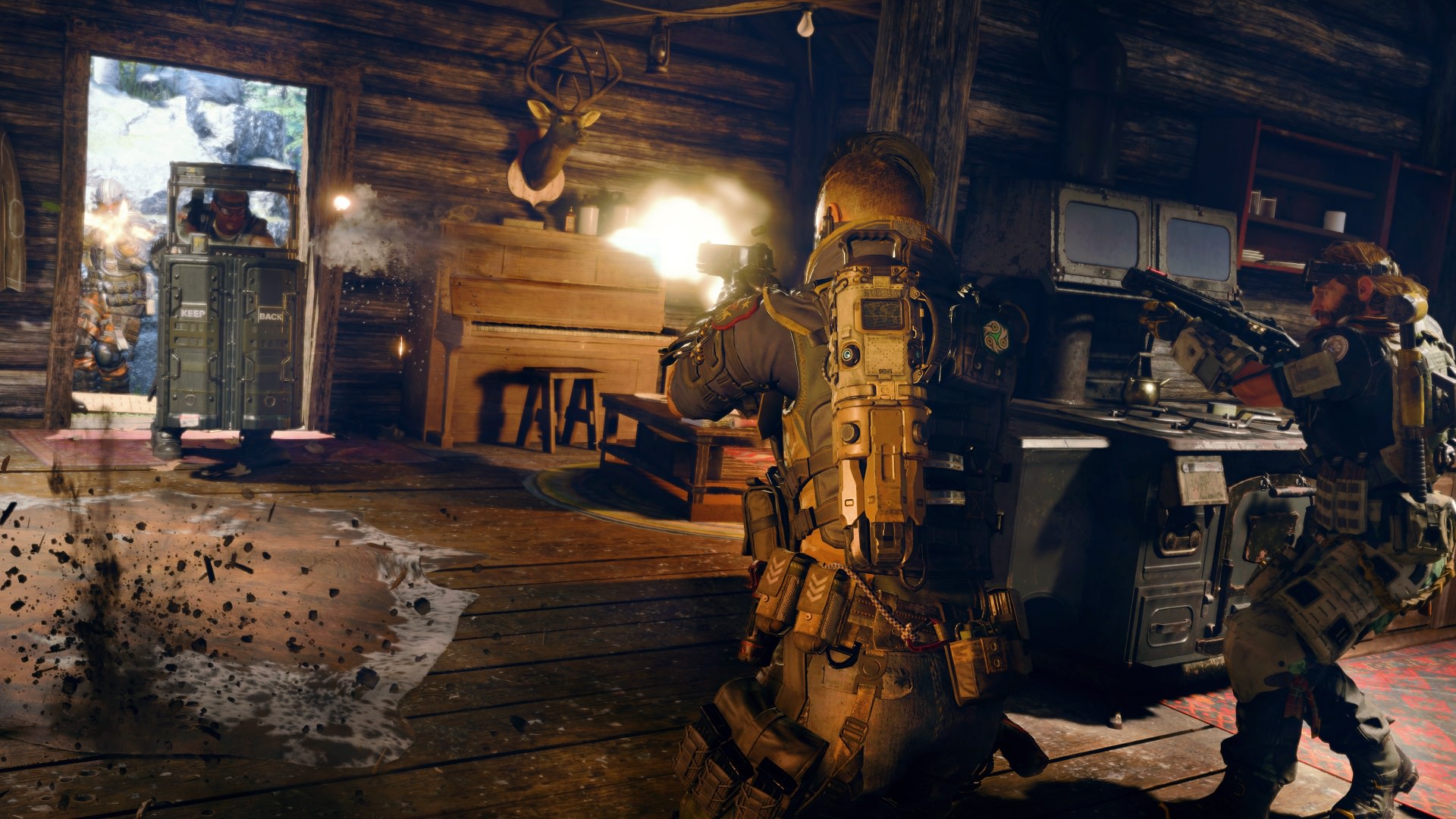 While Call of Duty: Black Ops 4 has been available for over a week now, we decided to hold off on publishing a review ASAP given we wanted to test and experience the game in real world conditions, and also, to know exactly what Treyarch has planned for microtransactions and the like, since that will affect how the game is played as a whole.

Now that we know the Black Market is returning, and we also know some of the little quirks the game has, we’re in a much better position to judge the game fairly. With Black Ops 4 now ditching the campaign portion of the game in place of multiplayer, Blackout, and Treyarch’s trademarked Zombies mode, does this version of Call of Duty get KIA (killed in action), or does it shake things up for the better?

No Campaign, No Problem
First off, I admit that I’m not a big fan of Call of Duty single-player campaigns, and almost always dive into multiplayer first. Having said that, I did not miss any sort of dedicated campaign for Black Ops 4. there are the Specalist HQ storylines, which act more of a tutorial than anything else. Will people miss the campaign and does it shoot down the value of this version of Call of Duty? It depends on who you ask, but so far, the people that I’ve talked to seem to be OK with this change, and I wouldn’t be surprised if this move is taken as the new norm for the franchise moving forward.

In place of the campaign, we have a rather meaty multiplayer mode with 14 maps out of the gate (with more coming in later for free confirmed), a super impressive battle royale mode (more on this later), and the most robust Zombies mode Treyarch has ever done. Overall it’s a fair trade-off. Just make sure you have PlayStation Plus or Xbox Live Gold when buying Black Ops 4, as almost all the modes require it.

Squish and Splat
With Treyarch’s focus now solely into the multiplayer, Blackout and Zombies portion of the game, the studio has refined the gunplay into near perfection (the servers are a different topic altogether). Each bullet hit, each headshot has a satisfying thud and splat sound, which is accompanied by a more grounded movement system. Yes, you can still jump, and slide, but you won’t be able to wall-run, do double jumps or any of the norms with futuristic shooters. Most gunfights are based on gun skill, map knowledge, and more often than not, Specialist abilities.

In case you haven’t been keeping tabs, Black Ops 4 brings back the Specialist characters from Black Ops 3, and added a few more. This time, each Specialist has two abilities, and how effective you are in using these abilities will be the deciding factor whether you win or lose.

Thes Specialists also adds another layer of strategy instead of just choosing which guns and perks to use. It’s deep enough that you’ll want to learn and understand how each Specialist behaves, but not too deep that you’ll have to start mapping out builds and such like in a MOBA game.

Perfectly Balanced…
While some might not be a fan of Treyarch’s Specialist system or even the inclusion of them, the studio has found the right balance for each, and no one feels overpowered to the rest. The same can be said for the guns. Sure, some will gravitate towards certain guns that they feel comfortable using, and you’ll hear players shouting on social media that X gun is overpowered, but that’s the thing: almost every gun is overpowered (OP) save for a few, which means Treyarch did a fine line in balancing weapons, and making sure they all get enough love from the community. Even gadgets are in the same boat as well. In this version of COD, there’s no grenade spam since a frag grenade will eat up a Specialist ability slot, which isn’t good enough for a trade off for most people.

Another thing that’s balanced are the maps, which once again adhere to Treyarch’s three-lane rule for better or for worse. Each map, even the one I hate the most (Icebreaker), has good plotting and passage ways, and each of the 14 launch maps are diverse in their own right, which means you’ll be able to play on each without feeling fatigued.

It’s plainly obvious that Treyarch has learned a ton from its previous Call of Duty titles, and Black Ops 4 is the culmination of it all.

Battle Royale Royalty
Of course, you can’t talk about Black Ops 4 without mentioning the game’s battle royale mode, Blackout. Right out of the gate, you might not be able to not compare it to PUBG (PlayerUnknown’s Battlegrounds) and that’s fine. What’s honestly shocking here is, it beats PUBG at its own game! Blackout is a far more tighter, more polished version of PUBG, at least from what we’ve played so far.

Another interesting bit about Blackout? Guns behave differently in the mode compared to their multiplayer versions. In Blackout, there’s bullet-drop, which means you have to lead your shots more. Perks, items and other stuff are handled differently too, which is understandable given how different the two modes play.

Needless to say, Blackout is such an amazing mode for battle royale fans, that I wouldn’t be surprised if this got splintered off on its own. It’s so good in fact, that it might cannibalize the player base of the multiplayer. Granted, you need to be a fan of battle royale in the first place to appreciate Blackout. If you aren’t a fan of the “jump in, hunt for weapons and gear, take out enemies and be the last man standing” formula of battle royale, I doubt Blackout will change your mind.

More Brains, More Everything!
As for Treyarch’s trademarked Zombies mode, it’s back and better than ever before! I’ll admit, I’m not a big fan of Zombies mode in Call of Duty games, but given how Treyarch started this whole trend and has been working on it for 10 years, it’s not surprising that they’ve mastered it.

Big change out of the gate for Black Ops 4’s Zombies mode is the list of available maps that are available at launch are now hiked up to three! Expect Easter eggs, and the “IX” which is an odd, but welcome zombie mode challenge that pits you gladiator style against hordes of the undead with your crew. Expect bosses, and even animals to make their way inside the ring!

Cracked Shield
While there’s a lot of praise to be heaped unto Black Ops 4, it’s not without issues. In our review, we wanted to play and write about the experience fans are getting, and in doing this, we’ve uncovered a few cracks in Black Ops 4’s armor.

First off, the matchmaking is, for some reason, a bit odd. It will more often than not, put you into matches that are almost over, halfway done, or out of reach. Worse of all? Finishing it or quitting out will count as a loss on your W/L record! Nope, not kidding. Granted, this can be changed easily by Treyarch, and I suspect it will be changed very soon, but it’s an annoying problem given how BO3 didn’t touch your win-loss stats for joining a game mid match.

Another thing to gripe about are servers. Just this weekend, we published a report that revealed that Black Ops 4’s servers are running in just 20hz, and not in 60hz as it was in the beta! This means that hit registration is off sometimes, which messes with the fantastic gunplay Treyarch has developed. Thankfully, Treyarch has acknowledged it, and confirmed that the studio will improve the performance, so this shouldn’t be an issue very soon.

One more issue we have a problem with is how prevalent “peeker’s advantage” is in Black Ops 4. If you notice you die even though you think you got the drop on someone, or if it looks like they saw you first, well, they just might have and here’s proof of it.

Thankfully for Treyarch, most of Black Ops 4’s problems are things that can be remedied by a patch. And given the studio’s reputation for supporting its games, we’re not expecting anything less.

Report for Duty and Given Them Hell
Even with a list of complaints about matchmaking, servers and the like, the important thing here is: Black Ops 4 remains FUN to play. You might rage at some of the technical issues, or even some of Treyarch’s gameplay design decisions, but you will want to continue playing it, which is a testament to how good of a product Black Ops 4 is as a whole.

While some people might miss the game’s campaign, Treyarch has proven that it’s not needed for a full $60 game, and you won’t feel cheated out of your money, either. Treyarch is the numero uno Call of Duty developer,and seems to be a step ahead of everyone else when it comes to innovating just enough, but still maintaining that Call of Duty formula that fans know and love.