In the realm of 4X titles, whether it’s turn-based epics like Endless Space 2 or grand strategy exploits like Stellaris, Triumph Studios’ Age of Wonders franchise occupies an interesting spot. Age of Wonders 3 isn’t quite 4X but there’s a significant amount of exploration, expansion and exploitation with a strong emphasis on extermination. It’s quite heavily reminiscent of Heroes of Might and Magic – the heroes and their armies are the stars with proper use of their abilities (and resource management) winning out in the end. But the question is: What would happen if Triumph shored up all the other elements and improved them dramatically? 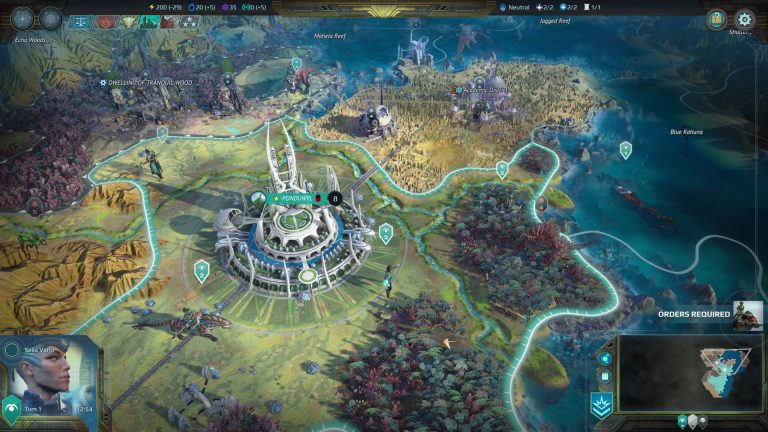 "Aesthetics are nice but each faction offers a different gameplay experience as well."

The answer can be seen in Age of Wonders: Planetfall. Departing from the medieval fantasy worlds of its predecessors, Planetfall sees the Star Union collapsing and six factions emerging from the wreckage. Players can take control of the Vanguard, a race of humanity that employs military technology like tanks, walkers and drones. Alternatively, there’s The Assembly, a race of cyborgs who can repair themselves with the remains of their foes, reassemble fallen allies and specialize in Arc weapons. Then you have the Amazon who gain bonus Morale when fighting in forests and can use genetically altered creatures to wreak havoc. And so on and so forth with the Dvar, Kir’ko and Syndicate.

Each race and their units look incredibly distinct. The Vanguard is standard sci-fi military with options for capes and Big Boss-esque eye-patches while their units comprise of tanks, gunbird and assault units. The Assembly, on the other hand, are appropriately nightmarish with their cybernetic augmentations – the Inspector is three heads connected to a floating drone, for instance. Aesthetics are nice but each faction offers a different gameplay experience as well.

The Vanguard can use combat drones and turrets while excelling in ranged battles (making them especially deadly when sniping). The Assembly boast Arc resistance and reap more rewards from successful fights. Secret Technologies further mix up the action in crazy ways. Want to infect your enemy with a deadly virus that converts them into bio-organic weapons? Take the Xenoplague. Those infected units can then be evolved into greater monstrosities.

Interested in temporal clones and units that teleport away from danger, preventing any potential Backlash attacks (or, alternatively, teleporting the enemy to throw off their positioning)? VoidTech has you covered. The sheer range of choice when customizing your commander also allows for tons of replay value. Perks like Martial Tradition refill all action points for your commander when kills are scored while Vices like Stubborn reduce the Colony’s Knowledge but expands resistance to status effects.

When entering a campaign as a specific race though, your Secret Technology is locked for story-telling purposes. Aside from the tutorial, three campaigns are available from the outset for the Vanguard, Dvar and Kir’ko but completing these will unlock more, and let you really delve into each faction’s story following the Collapse. Objectives are standard 4X, turn-based affairs – go here, gather resources, annex sectors, defeat NPCs guarding a location, colonize different parts of the map, etc. Two kinds of research – Military and Society – can be decided upon for additional technologies, colony developments, mods and whatnot. Taking technology to create temporal clones to add +1 to all resources, equipping cloaking devices for your units and such are just the tip of the iceberg.

Like Age of Wonders, you can queue up different kinds of buildings and units for production. Building a colony up doesn’t require building up districts like, say, Endless Legend but you can designate a greater focus on certain resources, specialize in certain structures and upgrade any annexed sectors. If you need more Energy, assign more colonists to that, though being able to manually select and allot colonists as opposed to messing around with a toggle would have been appreciated.

"It’s not reinventing the wheel as far as 4X titles go but being able to foster these kinds of relationships – though they can be damaged by doing quests for their enemies – goes a long way towards a more flexible, replayable experience."

Expanding your colony and garnering more resources is key so you’ll want to start annexing sectors. Each sector has its own benefits like Resources, Energy, Research and whatnot. However, paying close attention to the terrain type is key – depending on the terrain, different technologies must be taken to exploit those resources. For example, annexing some Arid sectors to your colony may provide some bonuses to production (depending on structures near them). However, you need to research technologies like Arid Exploitation to completely utilize them. On the other hand, this gives you something to work towards in mid-game, as more production is spent on the heavier hitting units like Tanks and Walkers.

The other problem is that you might not always have enough colonists. You could choose to make a forward base, which has the benefit of healing armies in the vicinity and fending off invading hostile parties. Besides, it also presents a nice bargaining chip when dealing with other races. This already makes Age of Wonders: Planetfall a big improvement over its predecessors. Depending on the races encountered, you can compliment them, insult them, become their vassal, lord over them, exchange map information, go for a non-aggressive pact, etc. You can also take on factions quests for different rewards or if you don’t have the resources to meet their demands. Garnering reputation will allow you to afford different units from other factions, which is a nice sink for your Influence.

Faction commanders will also react to your exploits across the world. Build a good relationship with your neighbors and they’ll be more amicable, perhaps even complimentary to you. Become a war-monger and they’ll threaten you with oblivion. It’s not reinventing the wheel as far as 4X titles go but being able to foster these kinds of relationships – though they can be damaged by doing quests for their enemies – goes a long way towards a more flexible, replayable experience.

"What does set Age of Wonders: Planetfall apart from its competitors is the combat."

I had fun being on good terms with the Automatons and living in peace, going to war with the Growth – which earned me some goodwill with the Vanguard – and then subsequently betraying the Automatons. Even the campaign provides a good amount of freedom in the decisions you can make – ally with Michael Valentine, completing his arbitrary quests, or crush him to advance forward. Just be careful that the Paragon don’t view this with disdain.

Though the campaign has the benefit of more exposition and character interactions, many of the quests still fall into the same pattern. Go here, collect or kill this within “X” number of turns, provide this many resources to a faction, etc. Again, nothing that’s going to break the mold when it comes to other 4X titles but it’s all handled incredibly well. It will inevitably force you to decide whether going out of your way to exterminate that Pirate Lair is worth it for the Syndicate when you could be fulfilling a major storyline quest instead.

What does set Age of Wonders: Planetfall apart from its competitors is the combat. Age of Wonders 3 had a fairly robust turn-based system where the number of action points consumed by a unit per turn influenced their actions. So if you moved very little, then a specific unit could attack three times in one turn. Planetfall expands upon this with numerous mechanics like grazing, which deals half damage for missed shots, and overwatch where you can hold your ground and attack an enemy that gets too close. Flanking an enemy is also important since you’ll deal increased damage but remember your positioning – it’s easy to get out-flanked and suffer heavy losses. There’s a definite XCOM-like feel to it all, as your units move from cover to cover, focusing and isolating certain foes. Then there are the different Operations which can be used for things like garnering more Influence from a quest to calling down a concentrated laser strike on your foes.

"It doesn’t take long to get the hang of everything and the game’s notifications are helpful enough to remind you of what’s going on without clogging up the interface."

It can be a little daunting at first but still completely manageable. Just be warned that bum-rushing an enemy who has the positional advantage and more firepower is often a bad idea. Auto combat is a good route to go if you don’t want to play out every single battle. Being told which battles are safe or low to high risk is nice, though some occasions may require direct control – like protecting a Syndicate agent who could immediately even if your firepower doubles that of the enemy.

Last but not least, the presentation in Age of Wonders: Planetfall is great. The worlds themselves have a stunning amount of detail while remaining streamlined and easy to parse. Units animate as well as they look and performance is very smooth with no hang-ups. The soundtrack is also well done, capturing that balance between a sweeping majestic adventure and sci-fi atmosphere. Voice acting was more hit than miss, thankfully, though some lines do come off a bit oddly.

As far as the user interface goes, it’s incredibly easy to use and navigate. Some quality of life features – like having a search tab for locating specific techs or control-clicking on a missing technology to go straight to it in the research tree a la Endless Space 2 – would have been great. But it doesn’t take long to get the hang of everything and the game’s notifications are helpful enough to remind you of what’s going on without clogging up the interface. The overall pacing also feels just right as the game slowly but surely ramps up in complexity as you progress.

"If you’ve been waiting for a game to fill the void left by Endless Legend or just want a Heroes-esque gameplay experience with many more diplomacy and economic options, Age of Wonders: Planetfall is definitely worth checking out."

Once you’ve finished the numerous campaigns available, there’s a Scenario mode for launching different matches across several types of planets – from the war-torn to the Xenoplague-infested. While custom scenarios with their own dedicated stories would have been neat, Age of Wonders: Planetfall does enough with its gameplay systems to ensure that each match is a new experience unto itself.

Age of Wonders: Planetfall may not have the lore of the Endless universe. It’s not even a game where you exploit the heck out of specific technologies and go on a tear through the galaxy like Stellaris. It is an utterly compelling 4X title with some great combat, playing to its strengths while offering some excellent visuals, unique gameplay and streamlined mechanics with exceptional depth. If you’ve been waiting for a game to fill the void left by Endless Legend or just want a Heroes-esque gameplay experience with many more diplomacy and economic options, Age of Wonders: Planetfall is definitely worth checking out.

This game was reviewed on PC.

THE GOOD
Excellent attention to detail in its sci-fi environments and unit design. Excellent variety to each faction with different technologies, Vices and other perks mixing things up. Combat benefits from new mechanics while enforcing a tactical turn-based approach. Diplomacy has been expanded wonderfully, making for some interesting encounters.